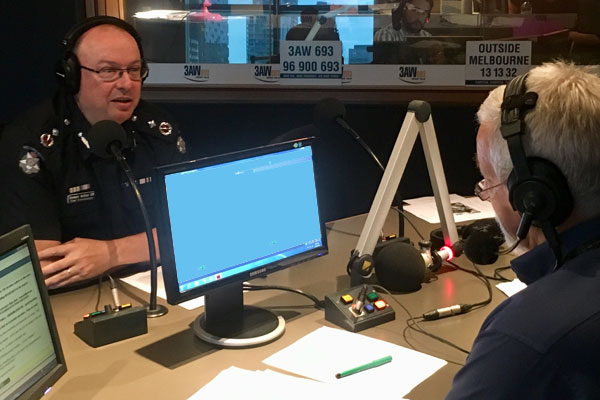 In his first interview after returning from six weeks stress leave, Chief Commissioner Graham Ashton sat down with Neil Mitchell and addressed a number of issues that have been plaguing Victoria Police and his plans for the year ahead.

Click PLAY below to hear the full interview in full

One of the main concerns during CCP Ashton’s time off has been African youth crime, but he says offending is not limited to one particular ethnicity.

“It’s almost a United Nations of offending,” he said.

“We’re locking them up, as many as we can and doing plenty about it.

“But there’s bigger social issues at play that we can’t fix.”

As revealed on The Rumour File yesterday, a Victoria Police Inspector has been suspending while an allegation into inappropriate workplace behaviour takes place.

“There are a lot of matters a foot there,” CCP Ashton said of the Taskforce Salus investigation.

“We’ve had two consecutive quarters of crime decreasing,” he said.

“Overall the numbers are coming down, carjackings etc.

“They just end up on the front page and it looks like the Wild West.”

“In my role it’s important to reflect the view of the majority of police members, which is that they’re very frustrated by what they see.

“They’ve frustrated by locking up the same offender again and again.”

CCP Ashton said the investigation into sexual harrassment allegations against Robert Doyle is being conducted within Melbourne City Council.

“No complaints have been made to us, we are not investigating,” he said.

But he did confirm SOCIT (Sexual offences and child abuse investigation teams) is investigating the claims made against actor Craig McLachlan.

CCP Ashton said he was “burning the candle at both ends” in 2017.

“I’m certainly feeling a lot better than I was last year,” he said.

Ashton said was feeling both mentally and physically better, after losing about 10kg over the past six weeks.

He has already indicated that he would not nominate for another five year term as Chief Commissioner but said today that he is hopeful he’ll be able to see out his current term.