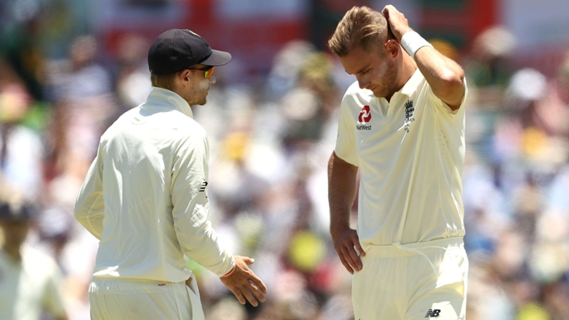 With England seemingly set for defeat in Perth, we use our imagination to examine five ways they can escape another Ashes whitewash.

England endured a chastening day in the third Ashes Test in Perth on Saturday, as Steve Smith and Mitchell Marsh thumped them all around the WACA.

The Australia captain (229 not out) and Marsh (181no) put on an unbroken stand of 301 to put the hosts 146 ahead with six first-innings wickets still remaining.

With England seemingly heading for a defeat that will hand the little urn back to their rivals, the visitors could be set to head to Melbourne and then Sydney desperately hoping to avoid a third series whitewash in four Ashes tours.

But as key batsmen Alastair Cook, Joe Root and Moeen Ali falter, and with a bowling department struggling to match the pace, hostility and penetration of Australia’s attack, what can England do to escape another 5-0 shellacking?

We’ve come up with a few ideas …

Almost 150 behind and still with six wickets to take, England are facing a huge first-innings deficit. However, showers are predicted for days four and five, and extended spells of inclement weather could help the tourists escape with a draw in Perth.

SOMEHOW GET STOKES BACK

Much has been made of Ben Stokes’ absence following his late-night altercation in Bristol in September. It now appears highly unlikely that Stokes will return in this series as he continues to await news of whether he faces criminal charges, but the star all-rounder’s presence would give the flagging tourists a huge boost.

Should England find themselves 4-0 down heading to Sydney, they might feel it a prudent time to give the squad players a chance to impress. The likes of Ben Foakes, Mason Crane and Tom Curran could bring a refreshing, no-fear approach to a downtrodden group.

Smith’s 229 on day three – his highest Test score – took his tally in the series to 416 runs at a whopping average of 208. The Australia captain has looked almost untouchable, to the extent England may be wise to consider alternative methods to keep him quiet.

GIVE UP AND GO HOME

If none of the above work, there is always one remaining option, of course. The coward’s way out, but does any England man want another 5-0 Ashes reverse on his CV?