Flash flooding is causing havoc around Melbourne, with low-lying streets drowning in the deluge, city buildings without power and major delays across the rail network.

The Alamein line has been suspended with buses replacing trains, but they will take an hour to arrive.

Three flights have been diverted from Melbourne Airport, with storm damage impacting the tram network too, on routes 12 and 57/59.

Montague Street is flooded near the West Gate, the left hand lane into the Burnley from Kings Way is also under water.

Emergency Management Victoria has more than 300 incidents of flooding around the outer suburbs.

The Bureau says a massive 43mm of rain has fallen at Sunbury in the last 24 hours.

The downpour is expected to ease in the early afternoon.

A line of heavy rain and storms has led to 35.0mm being recorded in the #Melbourne city gauge since 9am. This is more than was seen in September and October put together! #MelbourneCup https://t.co/zc3cMk6ClL pic.twitter.com/rjb4AMlYQe

FLASH FLOODING: Drivers have been left stranded along Kingsway as their cars go under water. #9News pic.twitter.com/FfUvkeVFJN

Marc sent through this photo of Taylor’s Road, St Albans. 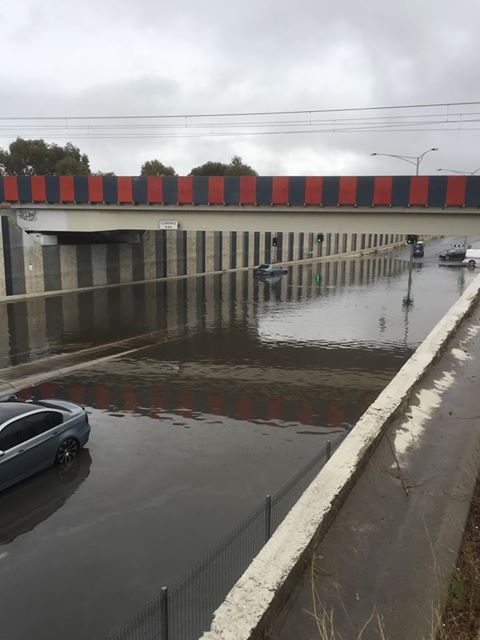