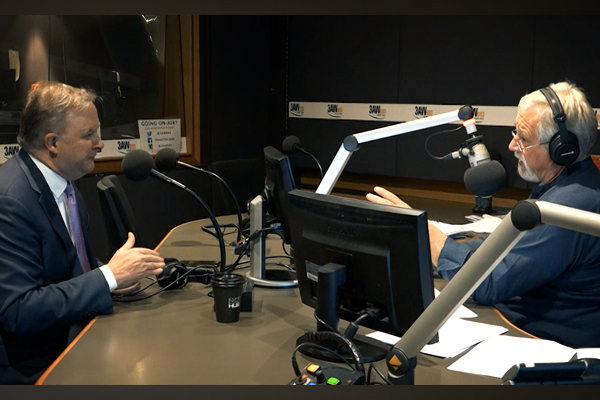 The morning after the Morrison Government was blindsided by the defeat of its workplace relations reform bill, Labor Leader Anthony Albanese has refuted suggestions he made a deal with Pauline Hanson in exchange for her rejection of the bill, but says the pair did chat over cake.

“I talked to her on Monday, she actually brought me a piece of her homemade carrot cake, that was very nice, I’ve got to say. But I talk to all of the crossbenchers,” Mr Albanese told 3AW’s Neil Mitchell.

“I didn’t know that she was going to vote against it until she did.

“The real people who made a difference in changing Pauline Hanson’s mind wasn’t myself, it wasn’t any other politicians. It was the nurses, it was the firefighters, it was the workers who went up to Canberra and talked directly about what the impact of this legislation would be.”

The government was left reeling when Ms Hanson surprisingly voted against the union-busting Ensuring Integrity bill, which would have made it easier to de-register unions which break the law, and disqualify rogue officials.

Neil Mitchell grilled the Labor Leader over whether he will support any form of tougher laws clamping down on union misconduct, which the Morrison Government has promised to put forward.

Neil: “Is there any way you will agree to any legislation that increases the laws that restrict union thuggery?”

Neil: ” That doesn’t seem to worry the CFMMEU, if you look at the fines they’ve got!”

Mr Albanese: “Forget the rhetoric. If someone commits an act of violence they can be charged. You know it. and I know it, so what you’re using now is just rhetoric!”

Neil: “I’ll forget the rhetoric, you forget the evasion. Is there any form of tougher laws you will support?”

Mr Albanese: “Well we will have a look at anything that’s proposed on its merits, but what we know is there are massive restrictions on unions right now, that things which are a crime, such as the term you used, are a crime right now. People can be prosecuted, and they go to jail.”

Press PLAY below to watch the fiery exchange.

Neil and Mr Albanese also tackled the controversial Medevac laws, and the Labor Leader explained why he supports the government’s approach to the conflict in Hong Kong.