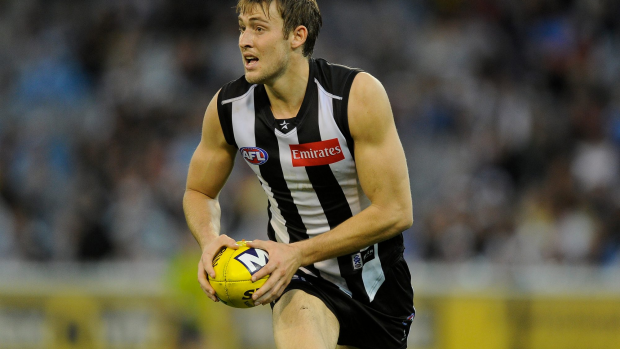 Buckley said it would have been easy for the team to give up, but was proud they played to the end.

He also criticised Herald Sun journalist Mark Robinson for persisting with a story about Collingwood’s alleged illicit drug use.

‘We don’t have a high opinion of Robbo at the moment,’ he said.

‘It was a pretty average effort trying to create justifications for compromised information that had been used.

‘You can only go so far down the track until you realise ‘we’ve got this wrong, why don’t we admit we’ve made a mistake?”

The Tigers had four injury concerns arising from the match, including Dylan Grimes, David Astbury, Shaun Hampson, and Jayden Short.

Reid, who has played just nine games in the last two years, said the side brought the right attitude.

He said the Tigers made too many ‘mental mistakes’.

Collingwood has won an absolute thriller one point.

Brodie Grundy roved and snapped a goal with just four seconds left after Nick Vlastuin was penalised for a controversial deliberate out-of-bounds call.

Alex Fasolo was the hero with six goals, and Adam Treloar won 32 disposals.

Richmond leads by five points after a scrappy, low-scoring opening half.

Poor disposal efficiency has accounted for just six goals to the main break.

The Tigers have lost Dylan Grimes to a hamstring injury, while Shaun Hampson (calf), Shaun Grigg (calf cork), Jayden Short (shoulder) and David Astbury (concussion) are all battling through pain.

The star midfielder said Cloke’s job will be made easier if the midfielders’ can provide more ball into attacking 50.

Cotchin’s suitability for the role has come into question of late, but Maric told 3AW Football he’s the right person for the job.

Maric also said Dustin Martin has held up well after an ordeal in which his father ran into trouble with authorities.

Friday night football pits together two teams that will be itching to improve on their season openers.

The Pies were humbled at the SCG last week, while Richmond were dealt an almighty scare by 2015’s wooden spooners.

Collingwood has brought in Brodie Grundy after he was overlooked in Round 1, while former Lion James Aish will make his Magpie debut.

Join the best commentary team in the game on 3AW Football.