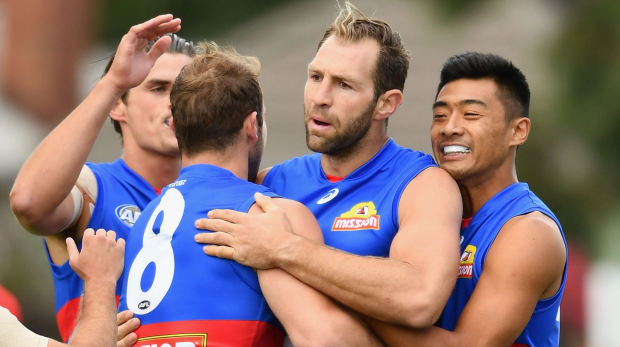 Morris could miss a chunk of the season after twisting his knee late in the game.

Lloyd was impressed with the Bulldogs’ flexibility, with players playing in multiple positions during the game.

He said the Pies should have done the same.

The Bulldogs have begun their premiership defence with a 14-point win over Collingwood.

Collingwood brought intense pressure in the contest, and led early in the third term, but a five-goal burst from the Dogs before three-quarter time proved decisive.

The Pies did themselves no favours, with inaccurate shooting at goal meaning they couldn’t capitalise on their hard work.

Click play for the full-time analysis with Lloydy and Shawry

Collingwood is dominating in the contest, but the Bulldogs lead by four points.

Travis Cloke struck a major blow early, nailing his first set shot as a Bulldog from 50m out.

The Dogs led by as many as 20 points before three second-quarter goals to Alex Fasolo brought the Pies right back into the game.

Matthew Lloyd suggested the Pies’ early end to 2016 may be helping now.

‘They have more energy,’ Lloyd said.

Lloyd and Tony Shaw both agreed that Travis Varcoe will be suspended for a high bump on Luke Dahlhaus.

Click play for the half-time wrap with Lloydy and Shawry

Collingwood has made a late change before their season opener.

New recruit Chris Mayne has come in to replace James Aish, who is ill.

Injured Bulldog Mitch Wallis spoke to 3AW before the game.

Wallis missed the 2016 premiership, and admitted he was mentally ‘cooked’ towards the end of the season.

But he said the drive to win a flag himself has helped him rekindle his love for the game.

Wallis said he’s around 4-6 weeks away from fully recovering from his broken leg.

Collingwood star Adam Treloar spoke to 3AW before the match.

Treloar said the team is excited to test themselves against the reigning premiers early in the season.

He also said Jordan de Goey is very remorseful after lying to the club and will bounce back with a point to prove.

In the wash-up of Carlton’s season-opening loss to Richmond, AFL great Tony Shaw gave the Blues an almighty clip.

Shaw said the Blues’ midfield is full of ‘downhill skiers’.

The Western Bulldogs take to the MCG for the first time since their historic flag – this time with skipper Bob Murphy.

And they have a new secret weapon, albeit one not so secret to the Pies.

Travis Cloke kicked 441 goals in 246 games for Collingwood, and comes up against his former teammates for the first time.

Join the No. 1 commentary team in the game for this riveting contest.