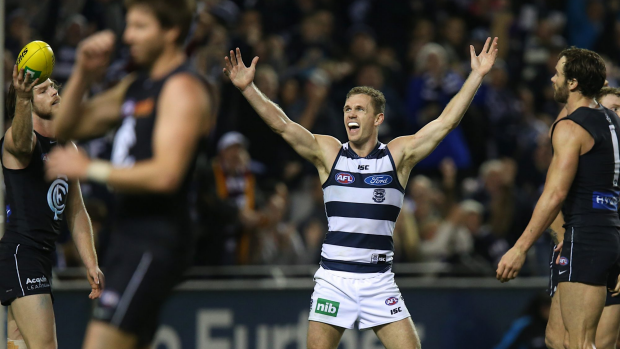 He said it’s probably bad for the game if players play to win high-tackle free kicks.

Smith was excellent in the ruck, comfortably beating star ruckman Shane Mumford and earning praise from his coach.

He told 3AW Football he knew he had to beat Mumford at his own game.

Geelong star Patrick Dangerfield spoke to 3AW in the rooms.

Dangerfield refused to say that Joel Selwood is the best player he’s played with, but he’s in the mix.

The Cats have won by 10 points.

Daniel Menzel kicked three goals for the Cats, as did Lachie Whitfield and Toby Greene for GWS.

HALF TIME in GEELONG

The Cats have run in five points in front.

GWS led by 11 points before the home side kicked three of the last four goals of the half.

He said Bernie Vince – who was reported for a swipe at Smith late in the match – shouldn’t have anything to worry about.

FULL TIME at the MCG

Hawthorn has extended its winning streak over Melbourne to 13, running out winners by 18 points.

Click play for the full-time wrap with Lethal and Lloydy

HALF TIME at the MCG

Melbourne leads by a point after a gritty first half.

Hawthorn booted four goals in a row to lead by 23 points, but the Dees hit back with a four-goal streak of their own.

However, the first half was overshadowed by the news that Muhammad Ali had passed away, aged 74.

Former boxer Barry Michael spoke to 3AW during the main break about the legacy of ‘The Greatest Of All Time’.

It’s a massive Saturday of footy on 3AW, kicking off with the Hawks and Demons at the G.

Melbourne will be out to snap a 12-match losing streak against Hawthorn, having not beaten them since Round 8, 2006.

But with the Hawks looking ever-so-slightly vulnerable in 2016, could this be the year?

Injured (and suspended) Melbourne star Jack Viney spoke to 3AW before the game.

Viney said the club is confident it is on the right track despite a few disappointing losses.

He also responded to claims he is a sex symbol.

He spoke about the Hawks’ debutant Kade Stewart, and also pledged $100 to Matthew Lloyd’s ice-plunge to help freeze MND.

We need to raise $10,000 for Lloydy to plunge into the ice pool on Queens Birthday weekend. Donate at FreezeMND.com!

Following the Hawks-Demons clash, 3AW Football brings you the blockbuster in Geelong.

The Cats and Giants have played some scintillating footy in 2016, but both were below their best in Round 10.

Geelong will have to show a lot more hunger than they did against the Blues, while GWS will be out to prove they can perform at their peak away from home.