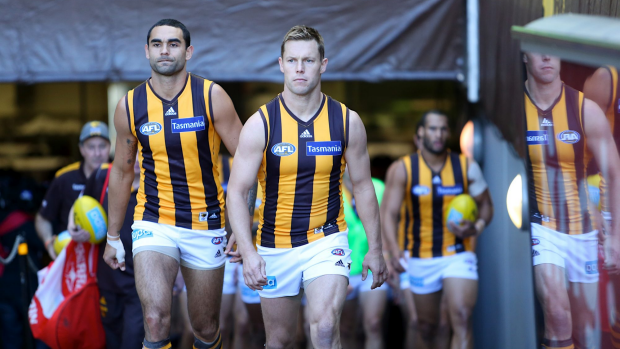 He spoke about the occasion and the leadup to the milestone.

‘I did enjoy people pumping me up!’ Mitchell said.

Hawthorn has kicked away for a 70-point win.

Sam Mitchell had 38 touches and nine marks in his milestone match.

Hawthorn leads by 10 points in a low-scoring game.

The Hawks’ famed kicking skills have let them down today – particularly in front of goal.

He said Sam Mitchell demands high standards of his teammates, but backs it up with his own diligent attitude.

Mick Warner: ‘Do you believe that Sam would rather win a Best & Fairest than a Brownlow?’

Ellis said Richmond has nothing to lose today – unlike Hawthorn.

He also spoke about the players at the club who play Pokemon Go.

Donald McDonald was Sam Mitchell’s coach at Box Hill, and he spoke to 3AW ahead of the champ’s 300th game.

He said even as a teenager he would control the centre and bring teammates into the game.

McDonald said he was ‘astounded’ that Mitchell was overlooked in his first draft.

Unfortunately, it’s been a big weekend for injuries so far.

Doc Larkins gave 3AW Sunday Football a full wrap, including the prognosis for Mitch Wallis after his badly broken ankle.

Doc Larkins: ‘Mitch Wallis’ fracture will heal in 8-10 weeks. If the ligament is managed, he will be right for 2017.’

Not even the panel that voted him the Rising Star back in 2003 could have foreseen all those decorations.

But the Hawks have four points to win at the MCG and can’t afford to be swept up in sentiment.

A win would see the triple-reigning champs jump two games clear on top of the ladder.

Richmond, on the other hand, aren’t looking at the 2016 ladder.

Featuring names like Markov, Drummond, Castagna, and McBean, the Tigers’ team is geared towards next season and beyond.

But with the younger players fighting to prove they can contribute at the highest level, Richmond may be more competitive than they look on paper.

Will the Hawks salute for Sam? Or can the Tigers spring an almighty upset?