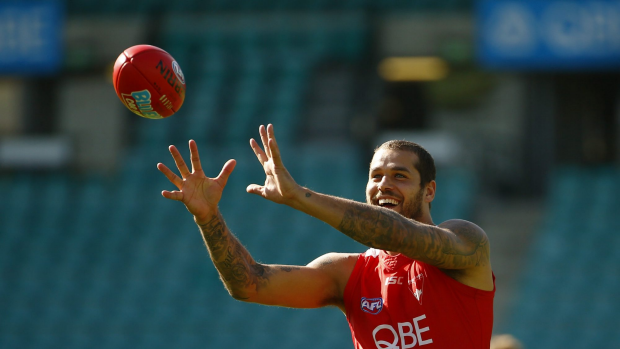 Mitchell kept Sam Mitchell to just 15 disposals, while picking up 21 of his own.

He said it was great to play on Sam, who he grew up idolising.

He said he was pleased with the performance after a tough week.

Kennedy paid credit to a ‘good bunch of young kids’ – like Hewett, Heeney, and Mills, to name just a few – who have brought energy to the team.

Sydney has held firm for an important 14-point win.

The Hawks threw everything they had, but unusually poor disposal by foot cost them dearly.

It’s been a grind in the first half, with just one goal kicked in the opening term.

But Sydney forced their way on top in the second, booting the next five majors to lead by 36 points.

However, Hawthorn hit back to cut the margin to 25 by the main break.

It’s the 2nd minute of the 2nd term and the fans are giving a standing ovation for Jarryd Roughead.

‘The fans have spoken.’ #AFLHawksSwans

Click play for the half time wrap with Lloydy and Shawry

He said Jarryd Roughead has continued his fitness training this week despite finding out his cancer has returned.

Kirk said the Swans hadn’t over-reacted to their loss to Richmond last week.

He also denied the Swans were too reliant on Buddy in attack.

Click play to hear from Kirk before the game

Get set for another night of drama as the Hawks and Swans face off at the home of football.

The two teams have battled out two memorable Grand Finals in recent years, and the defection of Lance Franklin up to the Harbour City has only spiced the rivalry up.

It’s been a difficult week for the Hawks, and the news of Jarryd Roughead’s medical issues will be driving on the men in brown and gold.

Join the best commentary team in the game on 3AW Football!