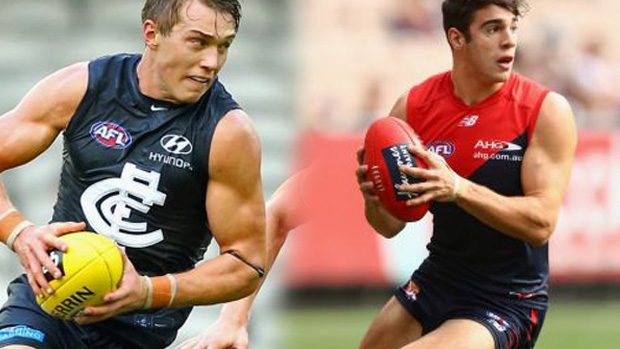 Carlton skipper Marc Murphy spoke to 3AW in the rooms.

He threw his support behind much-maligned teammate Dale Thomas.

‘All we can ask of him is to play his role for the side. He did that last week and I thought he was pretty good today.’

Young gun Christian Petracca spoke to 3AW after the win.

He said the team’s final-quarter effort was ‘awesome’.

Click play to hear from Petracca in the rooms

Melbourne has backed up its Round 1 win with a 22-point victory over Carlton.

It’s the first time the Demons have won their first two games since 2005.

But Cameron Ling said he doesn’t think the Dees will be overly happy with their performance.

‘I expected Melbourne to be a little more clinical today,’ Lingy said.

‘But it’s part of the maturing process. Things weren’t quite going their way, but they still found a way to win.’

Click play for the full-time wrap with Richo and Lingy

Melbourne leads by 10 points in a scrappy affair.

It’s a possession-high game, however both sides have made numerous skill errors.

Carlton CEO Stephen Trigg spoke to 3AW before the game.

He said he couldn’t be happier with how Brendon Bolton is leading the club.

‘He is doing an unbelievably good job with a list that’s got so much work to do on it,’ Trigg said.

Melbourne coach Simon Goodwin spoke to 3AW before the game.

He said Bernie Vince’s one-week suspension was a ‘silly thing’, but doesn’t want him to change his game.

However, the Dees have flattered to deceive their long-suffering fans before. The question on everyone’s lips is: can they back it up?

Melbourne hasn’t won its first two matches since 2005, and snapping that unwanted streak would be a good way to show their fans they mean business in 2017.

But the Blues won’t lie down easily.

With Marc Murphy and Matthew Kreuzer returning to form in Round 1 alongside Patrick Cripps and Bryce Gibbs, Carlton is well placed to build on its seven-win season in 2016.

Can the Blues snag an upset? Or will the Demons continue to turn the corner?