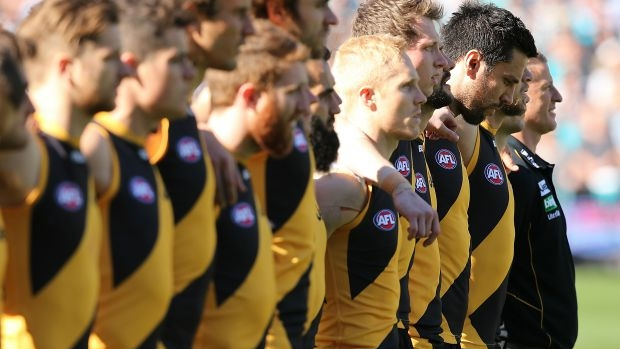 THE WASH-UP: North defender Scott Thompson spoke to 3AW Football from the rooms.

Thompson said the players had benefited from the week’s rest in Round 23.

‘I was feeling pretty fresh in the last quarter,’ Thompson said.

‘(North coach) Brad Scott had a smirk on his face!’

Thompson paid tribute to the evergreen Brent Harvey, who, at 37 years of age, was one of the best on the ground.

LISTEN: Hear from Scott Thompson in the rooms

Jarrad Waite booted four goals for the Kangaroos, while Brent Harvey looked like a teenager with a blistering second half.

LISTEN: Matthew Richardson reflects on another finals loss for Richmond

HALF TIME: It’s been a seesawing half, and Richmond leads by 13 points.

Jack Riewoldt booted three goals in the second quarter for the Tigers, but Jarrad Waite has three of his own at the other end.

Hard nuts Anthony Miles and Jack Ziebell have been influential in the middle. Ben Jacobs has kept Tigers skipper Trent Cotchin to just one kick.

LISTEN: Richo and Lingy assess the first half

Petrie said North wants a sub that is damaging in the attacking half of the ground, and Lindsay Thomas fit the bill.

‘We’re looking for six or seven touches and one or two goals,’ Petrie said.

‘He made me look a bit silly a few times last week.’

LISTEN: Hear from Drew Petrie in the rooms

Richmond CEO Brendon Gale also spoke to 3AW Football, telling the call team he is confident the Tigers can win.

Gale said the club wants to reward its loyal fan base.

‘We work hard to build an emotional connection with our fans,’ Gale said.

‘The lack of transparency around compensation and free agency is a worry.’

LISTEN: Hear from Brendon Gale in the box

The Tigers have waited 12 months for redemption after a shocking finals performance in 2014.

But after reaching the Preliminary Finals last year, the Kangaroos won’t be happy exiting the finals without a win.

The stakes are high and the MCG will be packed. Don’t miss a moment of the drama with 3AW Football.