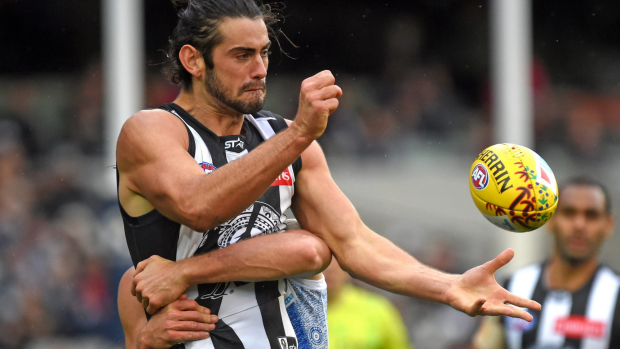 A number of Saints players – including Nick Riewoldt, Sam Gilbert, Paddy McCartin, and Dylan Roberton – came away from the game with injury concerns.

Collingwood skipper Scott Pendlebury told 3AW Football there is a lot of work to be done.

And he said any player who doesn’t want to do that work will find themselves in the VFL.

He said it was a gutsy win with only one fit player on the bench.

St Kilda has overcome injuries to Nick Riewoldt and Paddy McCartin to run out 29-point winners.

Leigh Montagna was sensational, racking up 40 telling touches, while Sean Dempster was impenetrable in defence.

Click play to hear from Matthew Lloyd and Luke Ball

St Kilda holds a slender two-point at the main break.

Leigh Montagna is the leading disposal-winner on the ground with 19, while Nick Riewoldt is the only multiple goal-kicker with two.

Click play for analysis from Matthew Lloyd and Luke Ball

While Ball had desperately wanted to lift the Saints to its second flag, he went on to play in a Premiership for Collingwood.

‘It sounds silly, paradoxical, to have less joy at being a Premiership player,’ Ball said.

‘I absolutely loved my time at Collingwood, but to the specific way in which it happened, I don’t really look back on it with any great jubilation.’

Ball was on the field for just 46% of the 2009 Grand Final, but he said he doesn’t have any issue with then-coach Ross Lyon.

The player who kicked the winning behind in St Kilda’s 1966 Premiership, Barry Breen, spoke to 3AW Football before the game.

‘I was just the fortunate recipient of an opportunity that went down in history,’ he said.

Varcoe, who played in three Grand Finals with Geelong, said he would do away with the traditional replay in the event of a draw.

Finnis said the 50th anniversary of the club’s 1966 Premiership was tinged with sadness that there hasn’t been another one since.

He also denied recruiting Jake Carlisle had been a ‘blue’.

Collingwood has been riding high since its dramatic win over Richmond in Round 2.

Brodie Grundy’s late winner opened the Magpies’ account in 2016, and they’ll be hungry to double up against the Saints.

Jeremy Howe will make his first appearance in black and white since crossing over from Melbourne.

St Kilda will be fired up after a poor showing in Nick Riewoldt’s 300th game.

Can they bounce back on Saturday afternoon? Or will the Pies chalk up a second win?

Find out with the best commentary team in the game on 3AW Football.