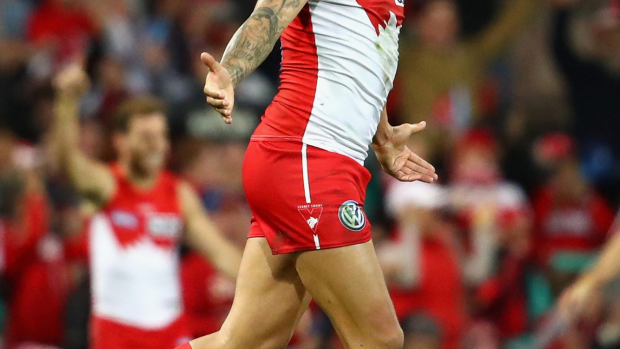 Collingwood star Adam Treloar tole 3AW the Pies still have a lot of work to do.

‘We don’t want to rest on our laurels and get spanked next week,’ he said.

‘We want to keep the pressure on ourselves.’

Click play to hear from Treloar after the win

Collingwood has won a thriller by a single point.

Sydney hit the front late in the game, but Will Hoskin-Elliott drilled a late set shot from a very acute angle to steal the lead back.

‘Schade will be talking about this to his grandkids,’ Tony Shaw said.

The Pies lead the inside 50 count 31 to 22, and could lead by more, but two late Kieren Jack goals brought the Swans back into the game.

Click play for the half-time wrap with Harf, Lloydy and Shawry

Matthew Lloyd said Franklin could end up the fourth-highest goal-kicker of all time.

He paid special tribute to Lance Franklin ahead of him 250th game.

‘I was nervous – I couldn’t speak to him the first time,’ Heeney said.

‘But he’s looked after the younger fellows. He took me under his wing.

‘He’s just an absolute legend on and off the field.’

Collingwood assistant Brenton Sanderson said the Pies have focused on their goal-kicking after kicking themselves out of their first two games.

‘In big games, you have to kick your goals. We haven’t done that,’ Sanderson said.

‘Hopefully we don’t have to talk about it after the game tonight.’

Dwayne Russell has given the Suns a serve as they sink into disarray.

‘Every year they over-promise and under-deliver,’ he said.

Matthew Lloyd said he’d be ‘shocked’ if Rodney Eade was coaching the Suns next year.

There could scarcely be more on the line when the Swans and Pies meet on Friday night.

The victor will walk away with four points and a kick-start to their season, while the loser will find themselves under the spotlight.

The heat will be on in this clash.

Megastar Lance Franklin joins the 250 club, but if last weekend’s showing is anything to go by, it won’t be the last milestone he celebrates.