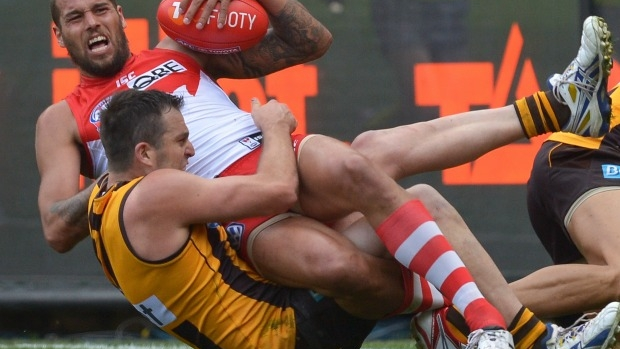 One of the final quarter specialists, Shaun Burgoyne says the Hawks practice how to react to close finishes.

It’s the fifth time the Hawks have won by under a kick this season.

Burgoyne explained how the Hawks train for those situations on 3AW Football.

It was built up as a heavyweight clash and the Hawks won by points.

In fact, they wont by 11 points. It was a Thursday night thriller which did not disappoint.

In the end, it came down to individual brilliance from Cyril Rioli and Shaun Burgoyne.

‘They just get it done,’ Matthew Lloyd said.

The Hawks lead by 11 points at the main break, having dominated the second quarter.

Matthew Lloyd said Bradley Hill’s 10-disposal quarter was the best of his season.

Kieren Jack and Dan Hannebery have both been down on their usual output.

Despite Sam Mitchell stating that sledging Kieren Jack about his family fued is not off limits, Swans forward Kurt Tippett says it won’t bother Sydney’s captain.

Speaking to 3AW Football, Tippett said Jack’s professionalism is as good as anyone.

‘I don’t think it would bother Kieren,’ Tippett said.

‘He had a really tough week and handled himself superbly and went out and played some terrific football.’

They’ve saved the best til last, when it comes to Thursday night football.

There’s a solid rivalry building between these two giants of the modern era, and right nowHawthorn sit a game clear on top of the ladder, but the Swans are looking to even the ledger tonight.

In such an even top eight, this match is absolutely vital for both sides.

The Swans welcome back Ben McGlynn, while Hawthorn made three changes.

Brendan Whitecross, Angus Litherland and Jonathon O’Rourke all return to the side, with Daniel Howe and Liam Shiels out with injury. Young speedster Billy Hartung has been omitted.

It’s set to be a ripper.