Gingerbread versions of The Salvation Army’s Major Brendan Nottle are back again!

The gingerbread men are raising money for The Salvation Army in the lead up to Christmas.

Last year, the ginger Brendan campaign, an idea which began on the Neil Mitchell program, raised $20,000 for the Salvos.

They’re hoping to beat that this year, with the current total sitting at around $5000.

The gingerbread Brendan’s are now on sale at all Ferguson Plarre Bakehouses across the state.

You can also purchase the gingerbread men online and, from tomorrow, they’ll be for sale outside The Salvation Army citadel at 69 Bourke St in the CBD. 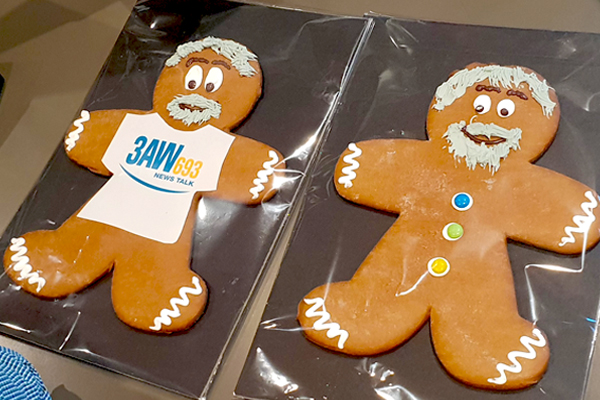 They were auctioned off on the program, with all money raised going to the Salvos.

Gingerbread versions of Brendan Nottle are back at Ferguson Plarre, with $1 from each sale going to The Salvation Army.

And, there are two giant Neil Mitchell gingerbreads up for auction, with all money going to the Salvos.