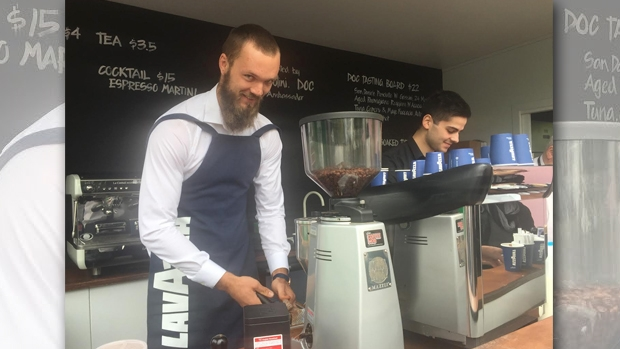 He told me his three favourite things are coffee, horse racing and footy. He revealed he started drinking coffee at the age of twelve when he ‘needed to wake up’ admitting he started ‘coffee real early.’

Wine lovers rejoice. The mutual respect between artist David Bromley and Wolf Blass continues to blossom. Bromley held a soiree at his stunning Prahran studio, (with a blue chandelier, quirky ornaments and a plethora of paintings) to celebrate another collaboration between the two. Catriona Rowntree reflected on her enjoyment of a good drop. ‘Unfortunately, I’m a chatterbox and anything more than two glasses and it just gets scary. I physically can’t stop talking,’ the Getaway presenter revealed.

‘I actually bought a couple of new suits in the last few weeks with the racing carnival in mind. But that’s unusual for me since I normally grab the same black suit out of the cupboard and away we go,’ says cricket great Ricky Ponting.

Gold logie winner and The Project presenter Waleed Aly and writer Tom Whitty have won a United Nations Association of Australia Media Peace award. The pair won the ‘promotion of social cohesion category’ with their Send Forgiveness Viral editorial, which called on Australians to stop the cycle of viral outrage with forgiveness.

Prada loving Cyndi Lauper will happily take selfies with fans and admirers, as long as she’s holding the phone. The Kinky Boots composer was most accommodating when asked for a photo during her trip to Melbourne for the musical’s premiere but is also particular about angles and lighting. Her advice for selfies ? ‘always take the photo from above’.

Spotted: LA based chef Curtis Stone (who has just opened Share, a new restaurant on cruise ship Emerald Princess) having a great catch up with mates at the new place to hang out Garden State Hotel in Flinders Lane.

Spotted: Shane Delia from Biggie Smalls and Daniel Wilson from Huxtaburger comparing notes on kebabs and burgers at the launch of The Park at Flemington. The top chefs will be feeding thousands over the Cup Carnival in the new public precinct.

Frank Ciccone loves his work. Between running a Ciccone lipstick empire and a flourishing hair styling business with his wife Helen Ciccone, he’s flat out for the Cup Carnival. He’s looking forward to styling the tresses of Emirates guest Jessica Kahawaty who is heading to Flemington with her mum. The Aussie gal and former Miss World Australia is a huge star in the Middle East where she hosts Project Runway Middle East.

Never give up on a dream. Aussie, now LA based, singer and actor Matt Hetherington has nabbed a guest star spot on new US show The Detour which stars The Daily Show’s Jason Jones ( also the writer). Hetherington has fulfilled a dream of filming in his New York City. Hetherington is not only a super busy singer/performer but really funny guy. The role taps into his comedic flair.

Which event gets The Bachelor’s gal Snezana Markoski, actor Sigrid Thornton, Lisa McCune (straight from filming on a Melbourne set), the Victorian Governor Linda Dessau, Marie Claire editor Jackie Frank and former Real Housewife Chyka Keebaugh, amongst others, in the same room? The ritzy soiree was the L’Or?al Unesco For Women in Science Ceremony at L’Oreal headquarters.

McCune brought her eleven year old daughter to the dinner because she wanted her to hear from some inspiring women. She was right. The four women who received grants are doing extraordinary work in areas such as male fertility and air pollution. All in the room were gripped by their commitment and motivation.

Whisper: Really? The word is that Hollywood hunk Orlando Bloom is a possibility for a Flemington trackside appearance. Will he remain fully clothed if he does turn up?

Some confirmed names for trackside birdcage frivolity include actor Alex Dimitriades as DJ for the new kid on millionaire’s row Sensis, while Didier Cohen will be spinning discs for Mumm marquee which is once again planning to be in party mode for the week.

And as social media continues to permeate our lives and culture, Twitter is setting up a pop-up of sorts in the Birdcage enclosure.

Whisper: A nine news reporter is understood to have had a bingle with the bosses’ car in the work car park – and left a note. Lucky no major damage done.