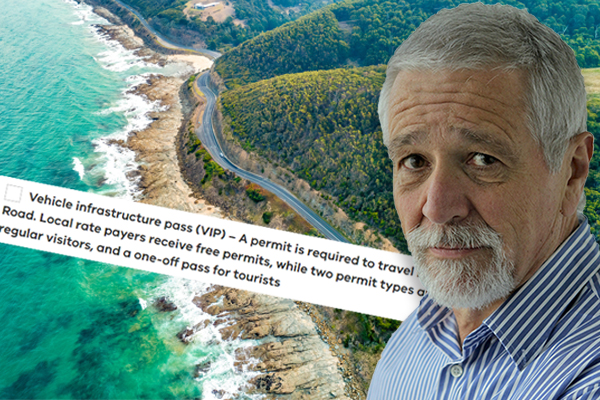 The Neil Mitchell program has found itself embroiled in a semantic argument with the Andrews Government over whether vehicle charges floated for drivers using the Great Ocean Road are ‘tolls’.

The state government is gauging public opinion on options to raise funds for the new Great Ocean Road Coast and Parks Authority.

One of the options up for consideration is a ‘vehicle infrastructure pass’, described on a government website as “A permit (that) is required to travel by vehicle and park along the Great Ocean Road”.

But the government insists the pass isn’t a toll, despite the similarities.

“We have no plans to toll any existing roads, that includes the Great Ocean Road. Any suggestion otherwise is wrong,” the Andrews government said in a statement.

Mornings program producer Heidi Murphy had a frustrating conversation with government officials over the difference between the vehicle infrastructure pass and a toll.

“I have had quite a semantic argument about a thing called a ‘vehicle infrastructure pass’, i.e. a fee for a permit to use a road that is currently fee-free, why that isn’t a toll, and what the difference is between the two,” she said.

“We agree to disagree on the words being used!

“This would be a charge, a fee, a pass that you would have to pay for. Do not call it a toll, Neil Mitchell!”

Neil Mitchell said the terminology used looks like a poor attempt to disguise the charge.

“I assume that the government is running this out to spin … the media parliamentary gallery,” the 3AW Mornings host said.

Other options up for public consideration are paid parking, raising the price of tourism operator licences and fees, and exploring public/private partnerships to open cafes, galleries and retail outlets to generate revenue.

The proposal to inject new funding into the Great Ocean Road is popular with local councils.

Mayor of Corangamite Shire, Neil Trotter, said the area is in desperate need of more money to cope with surging visitor numbers.

“On average people are spending about 45 minutes at the 12 Apostles and leaving behind about 20 cents before they go back to Melbourne, and we’re left with the bill to put in all the infrastructure.

“There’s got to be some other form of revenue.”

The Corangamite Shire mayor estimated the area needs an additional $20 million to $30 million a year to maintain infrastructure at major tourist sites.

You can have your say on the future of the Great Ocean Road here — engage.vic.gov.au/great-ocean-road