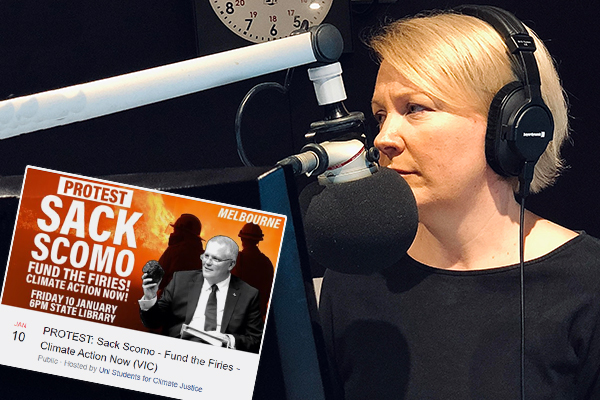 Political protesters are set to take to the streets on Friday afternoon, as the mercury and wind rises, and with it, the risk of further bushfire escalation surges across the state.

A protest organised by Uni Students for Climate Justice is calling for the Prime Minister to be sacked, payment for volunteer firefighters, genuine relief and aid for fire-affected communities, and a rapid transition away from fossil fuels.

Currently, 12,000 people have indicated on Facebook that they will attend the Melbourne protest at the State Library.

3AW’s Heidi Murphy urged protesters not to take to the streets and divert police attention away from the bushfires as the fire risk soars.

“A message for climate protesters this Friday: Stay home. Do something much more useful with your time than take to the streets of this city,” she said.

“They have every right, we all do, to have our say. To protest, to bag a government, to criticise authorities … but come on, this week? This Friday? This Friday afternoon when every indication is that we will be back right in the middle of a fire crisis in parts of this state?

“That fire emergency is where the focus should be for the emergency authorities in this state.”

Press PLAY below for more from Heidi Murphy.

But protest organiser Anneke Demanuele argued the protest should not be moved, and police don’t have to attend.

“I don’t think we need to reschedule this. I think this protest actually comes at a really, really important time. People are angry and outraged and very upset about the state of the climate crisis,” she said.

“We haven’t asked the police to attend this demonstration.

“People are perfectly capable of walking through the city streets without their assistance.”

Heidi questioned the protester demand that “genuine relief and aid” be provided for fire-affected communities.

“$2 billion is on its way, and more, from the federal government. The state government has a $50 million dollar agency they’re setting up and will put billions into the recovery effort, emergency grants are available right now,” she said.

Police have urge protesters to reschedule the event, which they expect 6000 people to attend, but they’re not hopeful that will happen.

“They are quite naive in their setting up and their planning of this protest,” he said.

“This is a distraction for us and it comes as probably the worst conceivable time, when we have significant resources to the east and the north-east of the state supporting the communities and our emergency services colleagues as well.”

Mr Hansen urged those considering attending the protest to rethink their decision.

“Those people who are sitting at home, who might be thinking about coming into the protest, I really ask you to look at this through the lens of the emergency services and the communities that are ravaged by fires.”

Press PLAY below to hear what police had to say.