How a Hawthorn man has brightened his neighbours’ days in lockdown

Melburnians are currently confined to within five kilometres of home, but a Hawthorn writer has found a way to keep his neighbours entertained while they’re walking around their neighbourhood.

Ricky Kuruppu has been typing out hopeful poetry on an old typewriter and leaving a poetic treasure hunt in public spaces in Melbourne’s inner-east.

He has been using fitness app, Strava, to map out where he’s walked, and leaving clues along the way.

Then he posts the maps on Instagram so others can search for his poetry. 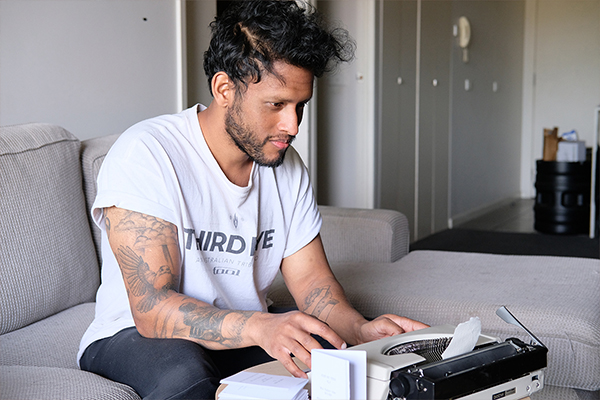 “I’ve done this for a while, but as of late I’ve kind of created a bit of a treasure hunt out of it, by taking photos of my pieces as visual clues,” he told Dee Dee.

“People in Hawthorn have been getting a bit of a kick out of it.”

The Hawthorn writer said he was feeling helpless after losing his job, and being separated from family in Queensland, but his poetry endeavour has helped him cope.

“Doing this has actually showed me there’s a lot that’s in my control,” he said.

Mr Kuruppa has put together a poetry booklet which he’s mailing out to those who can’t view his poetry treasure hunts. Visit  boyunderthebridge.com to request one.

I was hoping to have another treasure hunt done this weekend, but sadly I just didn’t have it in me. Sorry 😔 Yesterday was one of those days that have been more often those days during this pandemic. I freestyled this off the cuff this morning and now I’m standing in the sun eating a brownie. I’ll soon be releasing my little poetry zine I printed last week for posting out to anyone who wants one plus another lil something cool… ya boy has made it into the paper! Stay tuned. 💜 #typewriterpoetry #poetsofthegram #writerslife #writingcommunity #poetrycommunity #poetsofig #poetry #mentalhealth #melbourneiso #melbournecreative #depression #depressionquotes #mentalhealthpodcast #mentalhealthblogger #blackdog