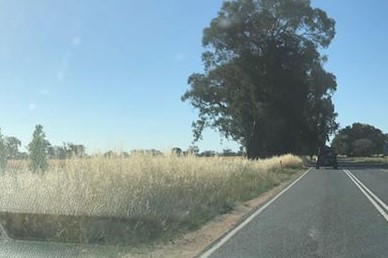 Grass on government-owned roadside land in many parts of Victoria isn’t being maintained, and many fear it may spark fires as the weather heats up.

A Camperdown cattle farmer said he wants to graze his herd on overgrown roadside grass, but it has become too difficult to apply for a permit.

Farmer Rod Watkins is worried about the fire risk on a 6 kilometre stretch of road which borders his property.

“It’s between 30 and 50 metres wide, between my boundary and the road,” he said.

“Less than two years ago we had a grass fire at exactly the area I’ve requested a grazing permit for. It got out of control, we had three CFA trucks there and they couldn’t get it under control, they had to call in the chopper.”

But Mr Watkins said he’s now required to pay for a native vegetation assessment of the land he wants to graze animals on, making the process expensive and time-consuming.

“It should not be my responsibility,” he said.

“It’s not my land, it’s the government’s land!

“All I’m doing is providing a means for keeping the grass down. I’m the one doing them a favour!”

Mornington Peninsula resident, Louis, said he has contacted VicRoads multiple times about overgrown grass in his area, which hasn’t been cut in more than a year.

“There’s a spot in Rosebud, between Jetty Road and Boneo Road. Vicroads owns three quarters of the property there where the new proposed freeway is supposed to be,” he said.

“The grass is over a metre tall and they just don’t do anything about it.

“Two or three phone calls I’ve made to them. They say ‘we’ll get to it when we get to it’, but it hasn’t been done all year and now it’s getting to the point where it’s over a metre high and it’s getting pretty dry.”

@3AWNeilMitchell roadside grass is out of control. This was taken just kilometres away from where 2009 Kilmore East blaze ignited. Locals deeply concerned about it and can’t touch it. @3AW693 pic.twitter.com/GcfWnJdJM9