A Melbourne commercial cleaner has had his number plates cancelled because they make reference to COVID-19.

But last week he received a letter from VicRoads saying the plates have been cancelled, and he must hand them in by July 29.

“The word they’ve used is that their records have indicated that ‘CVD-19 has specific negative references … and may be considered offensive by the community’,” he told Tony Jones, filling in for Neil Mitchell.

“They are offended by a plate that they issued!

“I don’t think it’s offensive in any way, in context.

“Someone has woken up in the morning and said ‘I don’t like it’. The question is: where does it stop? What number plate will be deemed offensive next?”

Mr Smith says the number plates have received “nothing other than positive comments”.

Press PLAY below to hear more about the ridiculous situation

The Department of Transport says it received a complaint about the number plate, prompting the review.

Mr Smith has been offered a refund for the custom number plates.

FULL STATEMENT FROM THE DEPARTMENT OF TRANSPORT:

“The Department of Transport is sensitive to community expectations and standards regarding number plate content and reserves the right to recall number plates following community feedback.

“There has been a complaint about number plate CVD19 and given all that Victorians have been through the complaint was upheld and the plates were recalled on the grounds it has been seen as insensitive.

“The terms and conditions that apply to custom plates are clearly stated on our website and include provisions to recall plates that are inappropriate or cause offence to the community.” 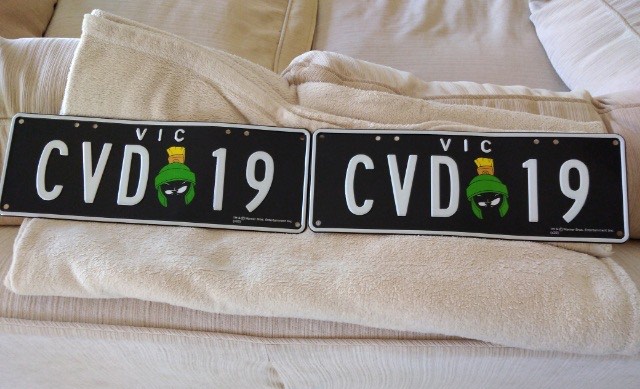