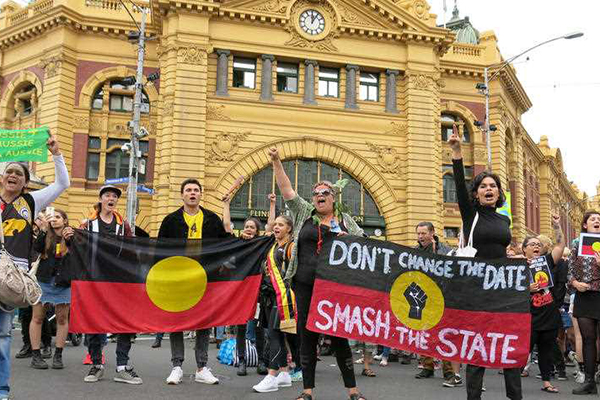 An executive of the state government-funded Koori Youth Council has accused Neil Mitchell of being a racist after refusing to answer questions about the council’s promotion of an ‘Invasion Day’ protest she is helping to organise.

NEIL MITCHELL: Is that legitimate use of public money?

NEIL MITCHELL: Why not?

TARNEE ONUS-WILLIAMS: Because I don’t want to. I have free speech, I don’t have to answer a question.

Ms Onus-Williams, who in 2016 was selected to be member of the state government’s Aboriginal Interim Treaty Working Group, also exercised her freedom to non-speech when questioned about whether protesters will co-operate with police.

ONUS-WILLIAMS: At the end of the day, we are Aboriginal people asserting our sovereignty on our country. So people can do things the way they like, and we like to do things we like to do.

MITCHELL: But on that basis you can say the aboriginal people can do whatever they like and just ignore the law of the land.

ONUS-WILLIAMS: We have a law of the land already, so we do hold our values strong to our hearts. So, yeah…

ONUS-WILLIAMS: I don’t think we’re really talking about that, so I’m happy to talk about the rally.

MITCHELL: Sorry, so you don’t want to answer that question, is that the point?

ONUS-WILLIAMS: No. No. That’s fine. Thank you.

MITCHELL: On what basis?

ONUS-WILLIAMS: Well, you’re questioning my legitimacy as a sovereign person of this land by asking me to deal with the police.

MITCHELL: Please don’t get assume that questioning equates to racism, that really is quite offensive both intellectually and morally.

ONUS-WILLIAMS: Well maybe you should get more comfortable with with because I don’t think you’ve been very nice to me, you’ve been quite rude.

The interview prompted a big response from listeners.

As soon as she called you a racist Neil, you won.
Anyone who delves into the realm of ad hominem attacks reveals themselves as someone who can’t keep up intellectually.
Take comfort in that ✌🏻

well that was a train wreck of an interview.

Attack the argument, not the person making it. It’s too easy to “play” the “racist/sexist/phobic” card to avoid a reasoned discussion/argument.

A perfect example of people descending into personal abuse when being questioned. Sadly becoming more common.

After the interview, Onus-Williams appeared happy with her performance.

Can I put this on my resume? https://t.co/n2rRvDmUAP