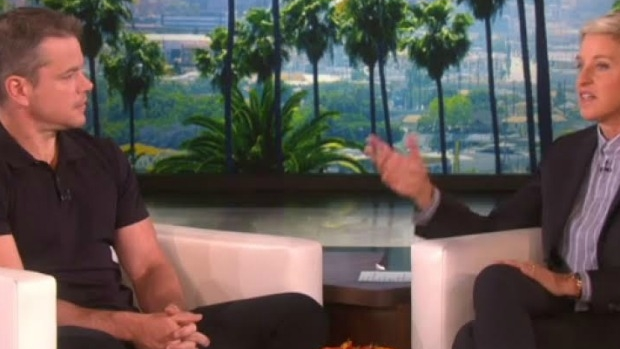 In the latest sign that online commentary has moved even deeper into the Idiot Zone, actor Matt Damon has been widely branded ‘homophobic’ after an interview he did with The Guardian. His allegedly incendiary comment was:

‘In terms of actors, I think you’re a better actor the less people know about you, period. And sexuality is a huge part of that. Whether you’re straight or gay, people shouldn’t know anything about your sexuality because that’s one of the mysteries that you should be able to play.’

This was promptly interpreted – or misinterpreted – as meaning ‘gay actors should stay in the closet’, which is not what Damon said or meant.

Talk show host Ellen DeGeneres, one of the most famously gay people on Earth, saw the attacks, sensed something was wrong and had Damon appear on her show to clarify what he meant, which he did.

‘I was just trying to say actors are more effective when they’re a mystery. Right? And somebody picked it up and said I said gay actors should get back in the closet, which is stupid. But it’s painful when things get said [on your behalf] that you don’t believe.’

Damon continued with a lament about the online impulse to create clickbait content: ‘In the blogosphere there’s no real penalty for just taking the ball and running with it,’ he said. ‘You know what I mean? You’re just trying to click on your thing.’

DeGeneres defended Damon, saying: ‘I know you and I know you’re not that guy.’

None of this was enough, of course, so the haranguing has continued. Doubtless, those incensed by Damon will refuse on principle to go see him in The Martian. Whether they now arrange worldwide protests in front of theatres to convince others to do the same remains to be seen.

Clearly qualified following her terrific performances in The Martian and Interstellar, Jessica Chastain has taken a swipe at the sexed-up portrayal of women in fantasy/sci-fi films. Speaking to Radio Times, she opined:

‘If you look at films like Elektra and Aeon Flux, the problem that studios have is they try to make kick-ass women very sexualised. They have to be in some catsuit. But if you look at the most incredible female roles, like Ripley in Alien, she is a very sexy woman but she’s not wearing a lot of makeup. She’s in a T-shirt and jeans. What’s sexy about her is how capable she is.

‘Same with Jennifer Lawrence in Hunger Games; she’s not wearing a catsuit, either. Studios have misjudged it in the past, and thought audiences weren’t interested in seeing a woman in an action role who’s a capable, intelligent woman and isn’t only leaning on her sex.’

This sexualisation no doubt stems from the influence of Jane Fonda in 1968’s Barbarella and Chastain certainly makes a valid point.

Still, as long as stars like Resident Evil’s Milla Jovovich and Underworld’s Kate Beckinsale – and let’s not forget Anne Hathaway in her BatGirl get-up – keep appealing to the male demographic by donning unforgiving, attention-demanding catsuits, the trend will surely persist.

FEMINISM HAS NO PLACE IN FILM, SAYS COTILLARD

As if to negate Chastain’s chiding, Oscar-winner Marion Cotillard (La Vie en Rose) said at Cannes that she doesn’t want feminist discussion as part of the film scene.

‘Film-making is not about gender. You cannot ask a president in a festival like Cannes to have five movies directed by women and five by men. For me it doesn’t create equality, it creates separation.

‘I don’t qualify myself as a feminist. We need to fight for women’s rights but I don’t want to separate women from men. We’re separated already because we’re not made the same and it’s the difference that creates this energy in creation and love. Sometimes in the word feminism there’s too much separation.’

Somebody really needs to get her, Chastain, Julianne Moore and Cate Blanchett together in a TV studio to talk this one through.

Shortly after the breathless, headline-grabbing announcement from NASA that they just might have found evidence that possibly points to the conceivable existence of something very much like water on Mars, director Ridley Scott calmly stated that he knew about this ‘news’ months ago while researching The Martian, only it was too late to include in the movie. NASA has since scoffed at suggestions that making their announcement in the week of The Martian’s global release was a publicity gambit.

Still on Scott, he claims, via an interview with Den of Geek, that Ryan Gosling is circling the central role in the much-feared Blade Runner sequel. Original star Harrison Ford is already inked up to reprise his role as Deckard.

Everest remained on top with a $2.2m haul across 451 screens for a two-week total of $7m, while Adam Sandler’s Pixels (#2) went from strength to strength, taking $2.1m on 412 for a three-week total of $8.2m, registering an increase in average audiences per screen of 28%.

The huge success of the family film Oddball underscores just how well Australian films are doing in 2015. According to figures from the Motion Picture Distributors Association of Australia, local films have raked in just over $56m, which equates to 6.3% of ticket sales so far this year, making it the strongest year since 2001.