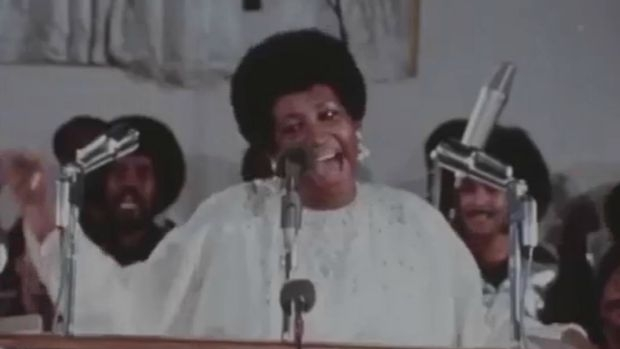 Legal eagles for singing legend Aretha Franklin have succeeded in stamping out festival screenings of Amazing Grace, a 1972 documentary about Franklin made by the late Sydney Pollack that has never been seen.

The film was meant to be released in 2011 by producer and UCLA music professor Alan Elliott after the Herculean task of matching the audio to the footage (Pollack had neglected to sync the sound by using a clapperboard), but was blocked by Franklin.

She has since prevented festivals in Chicago, Toronto and Telluride from screening it. Said the Queen of Soul after the Telluride injunction: ‘Justice, respect and what is right prevailed and one’s right to own their own self-image.’

From all reports the film is fabulous and celebrates Franklin and her faith as it chronicles the making of her 1972 gospel album Amazing Grace.

And she’s gone on record with the Detroit Free Press saying that she likes the film, but she’s proving a stickler about protecting her image and enforcing a condition that the footage  shot in 1972 would never be used for commercial purposes. Plus, she has to give her consent.

Still on the Aretha front: the long-touted biopic is apparently going ahead – but with Jennifer Hudson, not Halle Berry, gearing up to play Aretha.

Berry was apparently tapped by Franklin, 73, but now, apparently, Berry’s too old. Ouch.

Though all of us have plenty to gain from China’s rapidly growing love affair with Western movies, there is, of course, a downside and that, of course, has to do with the fact that the place is still run by old-school Communists.

As related by The Hollywood Reporter, it seems that the peeps at the top didn’t like the look of an American film such as Terminator: Genisys doing better than a flag-waving government-backed epic like The Hundred Regiments Offensive.

So what to do?

Well, in order to meet official box-office targets for the film, they instructed cinema owners to issue tickets for THRO even if people were off to see Hollywood films, such as Arnie’s.

This falsely boosted the box office of THRO, while effectively robbing dosh from Western films.

But China isn’t the shut-up-and-do-as-you’re-told society it once was. Not only did the fiddle quickly get out on social media, the country’s two biggest independent film production houses – Bona and Huayi Bros – have come out to say something stinks.

Seems the Chinese government wanted the bragging rights to reflect on the 70th anniversary of the end of World War 2 and China’s victory over Japan, but the fact that the wrong tickets were being deliberately issued – and then written over in biro with the correct screening information! – was too tasty for Chinese bloggers to ignore.

It’s yet another sign of how movies are helping push change in China, which is set to overtake the US as the biggest film market on the planet by 2018.

It used to be 2020, but the Chinese love for cinema is so strong they moved the date up.

And as if to labour the point, Tom Cruise’s Mission Impossible: Rogue Nation set a new opening-day record for a non-3D western film by taking a massive $US18.5m on Tuesday. This is the cherry on top of the  the film has taken at the global box office.

ALL ABOARD FOR ‘TRAINSPOTTING’ SEQUEL

With his newest film Steve Jobs hot from the oven and ready to go, director Danny Boyle has confirmed what fans have long wished for – that the Trainspotting sequel is a-go.

All four original cast members have signed on: Ewan McGregor (Renton); Robert Carlyle (Begbie); Jonny Lee Miller (Sick Boy) and Ewen Bremner (Spud) are keen to do it. With a release date slated for 2016 to mark the original’s 20th anniversary, all Boyle has to is line up gaps in all their schedules.

No word yet if that creepy baby doll is going to make a cameo appearance crawling across a ceiling.

Many people might well think she’s the bee’s knees, but actress Meryl Streep can’t seem to rouse much reaction the good people in the US Congress.

Speaking at the Telluride Film Feetival, which was showcasing her new women’s-rights-era film Suffragette (she actually has but a cameo in it), Streep told of her crusade for new equal rights legislation.

She wrote to all 535 members of Congress, sending each a copy of the book Equal Means Equal by Jessica Neuwirth along with a plea to enshrine the Equal Rights Amendment into law.

How many write-backs did she get? Five. Owww! That smarts.

Actress Amber Heard, aka Mrs Johnny Depp, is set to appear in a Queensland court on Monday 2 November to face some pretty heavy charges relating to the unauthorised importing of Pistol & Boo, the couple’s Yorkshire terriers into Australia on their private jet in May while Depp was shooting the latest Pirates of the Caribbean film.

This includes the not-to-be-sneezed-at charge of falsifying a document.

Depp continues to joke about the debacle, saying in Cannes recently that he ate his dogs on the direction of Agriculture minister Barnaby Joyce.

There’s certainly no underestimating the power of rap if the opening week of the NWA biopic Straight Outta Compton is any guide. The film took out #1 with a monstrous take of $5.9 million on 323 screens, echoing its huge worldwide gross of $US170m.

Not bad for a relatively low-budget $30m film.

This Christian film about infidelity opened without any fanfare here but is still managing some decent hauls, while in America the film actually knocked Straight Outta Compton off the top of the box office chart! Since opening on 28 August, the $3m faith-based film has made a neat $30m.

That’s pretty good considering the film’s only name-star is God, and He doesn’t actually appear in the film.