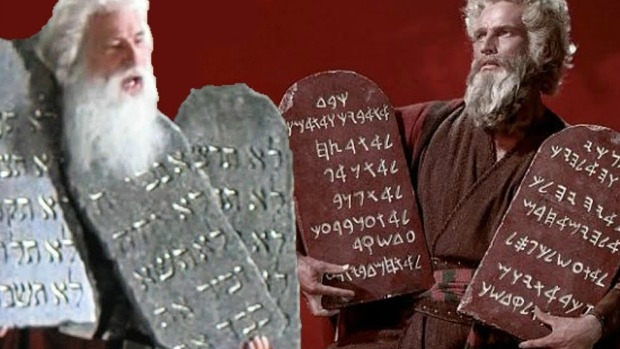 ’10 COMMANDMENTS’ IN FOR REBOOT

Seems there is no God. Despite much prayer from those who survived the biblical epics Noah and Exodus it appears Paramount is serious about remaking the classic 1956 Red Sea-splitter The 10 Commandments.

There’s no director, star or writer attached as yet, but they’ll apparently be going for a new angle on the old story.

Hopefully they’ll address the rather glaring fact that, according to the Mel Brooks documentary The History of the World: Part 1, there were originally 15 commandments. Perhaps Brooks could play Moses.

Much as we wince at the thought, the prospect of a remake follows standard accounting logic: Noah made about $360m; Exodus around $260m.

And, as we painfully know, in Hollywood there’s but one commandment that overrules all others: Thou Shalt Follow the Money.

TARANTINO ‘PICKED ON’ FOR BEING WHITE

Given how deeply woven black culture is into his films – Pulp Fiction, Jackie Brown, Django Unchained – writer/director Quentin Tarantino would have preferred a ‘thank you’ card from certain commentators who, instead, have ribbed him for being white.

‘If you’ve made money being a critic in black culture in the last 20 years you have to deal with me. You must have an opinion of me. You must deal with what I’m saying and deal with the consequences.

No reports on whether he, at any point, blew a raspberry.

Alpha male director Christopher Nolan (Dark Knight; Intertellar; Inception), a die-hard fan of film over digital, has admonished movie exhibitors for being lazy about the quality of the environment they provide film lovers.

Speaking at the London Film Festival, Nolan said: ‘For some reason, it has become acceptable to say ‘we are providing this empty room with a TV in it [so] just watch a film’.

‘That has to change and if it doesn’t change, forget film, forget digital, if that experience for the audience is not valued people [will] stop going…the experience has to be something great or, of course, people don’t want to come.’

He also showed no signs of softening his hardline support of shooting his huge films on film.

‘I have conversations with studio heads and at some point when I’m passionately advocating using film they’ll say ‘at the end of the day doesn’t storytelling trump everything?’ I say: ‘No it doesn’t! Otherwise we’d be making radio plays, it would be a lot cheaper’.’