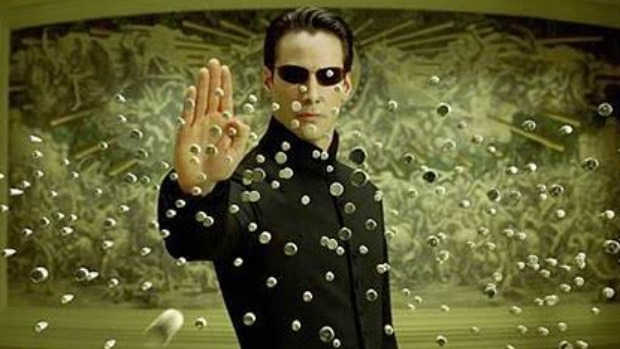 GET SET FOR MORE MATRIX

With the original Matrix Trilogy now snugly embedded in popular culture, Warner Bros is now musing over the wisdom of rebooting the series created and directed by the maverick Waschowski siblings. The film were hugely successful: The Matrix (1999) took about $US470 million, The Matrix Reloaded (2003) hoovered up a staggering $US740m while the finale, The Matrix Revolutions (2003) took around $US430m.

The films broke ground both for the dazzling complexity of its strictly adult sci-fi concept and for its slew of digital visual effects, which introduced ‘bullet time’ to the nomenclature (being ultra slow-motion action filmed  from multiple angles in a single shot so that the figures appear frozen in mid-air).

Now, nobody associated with the creative side of the films is apparently behind the talk, but Warners is obviously aware of the mega-bucks a successful reboot can sweep in. (Planet of the Apes, Star Trek, Rocky, etc). Here’s hoping they focus on ‘reboot’ rather than ‘remake’ and inject enough original thought to honour the original films.

‘GET OUT’ STAR REACTS TO SAM L JACKSON DIATRIBE

The reaction to Samuel L Jackson’s careless quip that black British actor are taking jobs away from African American actors in film and TV hit ground zero when one of the main targets in his radio diatribe, Get Out star Daniel Kaluuya, pushed back.

After acknowledging the good Jackson’s success had done in breaking barriers and serving as a role model for black actors, In an interview with GQ magazine, Kaluuya said:

‘Here’s the thing about that critique, though. I’m dark-skinned. When I’m around black people I’m made to feel ‘other’ because I’m dark-skinned. I’ve had to wrestle with that, with people going ‘You’re too black.’ Then I come to America and they say, ‘You’re not black enough’…

Worldwide the film has taken a whopping $US340m, so expect this successfully rebooted series to continue along with China’s seemingly unquenchable hunger for Hollywood  multiplex fare.

ORSON’S FINAL FILM BACK ON TRACK

The final, unfinished film by Orson Welles, The Other Side of the Wind, is set to be ‘completed’ thanks to Netflix, which will get Hollywood alpha-producer Frank Marshall, who worked on the original, to oversee the project.

Starring John Huston, Paul Mazursky, Mercedes McCambridge, Dennis Hopper and Welles biographer Peter Bogdanovich (who will also help with the restoration), the film tells the satirical tale of an ageing director’s attempt to complete his last film in a changing film making environment as the old studio system collapses and young filmmakers fill the void.

The film began production in 1970 but stalled in 1976 after being plagued by production and financial problems.

Welles passed away in 1985. He shot about ten hours of footage on a variety of film stocks.

KONG KING OF THE MULTIPLEX

Kong: Skull Island, the latest entry in the centrury-spanning King Kong film series, roared to the top of the box office, taking a massive $4.7 million over 401 screens. Less warmly received was the Aussie comedy A Few Less Men (#20), which took a puny $92,350 on 96 screens, which works out to a per-screen average of $962. That’s just a few people per session. Oww.

In its second week Jasper Jones (#5) saw an odd change of fortune. After a strong opening the previous week, the film took $395,645 across 223 screens, bringing its total to $1.3 million – a thin return against a reported $5 million budget. Its lukewarm per-screen take of $2774 marks a decided downturn and suggest word-of-mouth has soured.