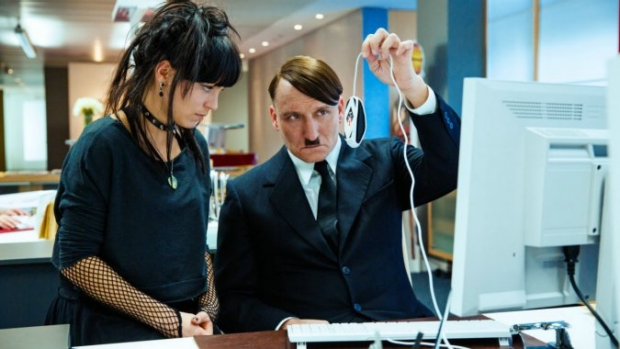 For as long as we can remember, Toy giant Hasbro – the makers of the hugely successful Transformer toys and movies, and owner of iconic board game company Parker Brothers – has been planning a film based on its classic greed-is-good board game Monopoly, a project that has now shifted into second gear thanks to a screenplay by Andrew Niccol (Gattaca; The Truman Show). Well, now there’s another fact-based Monopoly film on the boil, totally independent of Hasbro, that will go right back to the true origins of the game, which was patented in 1903 by proto feminist Elizabeth Magie. Called Landlord’s Game, it pre-dated the appearance of Monopoly by at least 30 years and was intended as a takedown of slumlords and capitalist pig-dogs. Fittingly, Magie eventually sold the rights to her game for $500 without bothering to lock down a back-end deal.

THE ‘RETURN’ OF HITLER

The great Mel Brooks taught us that, in the right satirical context, the figure of Adolf Hitler could provide comedy fodder as good as anything else, and the Germans are proving just how true that is. A new ‘Borat-style’ comedy film, Look Who’s Back, is presently burning up the German box office, hitting number one after three weeks. Based on a huge bestseller by Timur Vermes, the film catapults Hitler into contemporary German society and is being seen as a timely critique of the worrying rise of right wing extremism.

STEVE JOBS FLOPS IN US

Despite all the great reviews and Oscar buzz, the film Steve Jobs has died at the box office. Directed by Danny Boyle (Trainspotting; Slumdog Millionaire), based on a screenplay by Aaron Sorkin (The Social Network; The West Wing) and starring Michael Fassbender, the film took a paltry $US7.3m on its opening weekend, which is only a few dollars more than the small-scale 2013 film Jobs, which took $US6.7m. It’s possible the excellent Alex Gibney documentary Steve Jobs: The Man in the Machine that’s doing the rounds has rendered the new film as too much information about an all-too-famous public figure.

This sounds like trouble: a proposal by the Australian Directors’ Guild would see 50% of Screen Australia funds go to films and TV shows directed by females. Says ADG president Ray Argall: ‘Current funding is not being shared in a representative way. The ADG is concerned with diversity of all types, but is particularly concerned with the dramatic lack of equity in the funding of women and, in particular, female directors.’ Quotas are always troublesome and frought with dilemmas that are counter to common-sense. Given the fragile state of the Australian film industry, where things are evolving in the right direction and at the right pace, it really sounds like a bad idea at the wrong time. To employ a metaphor, when building a house of cards you shouldn’t go opening windows.