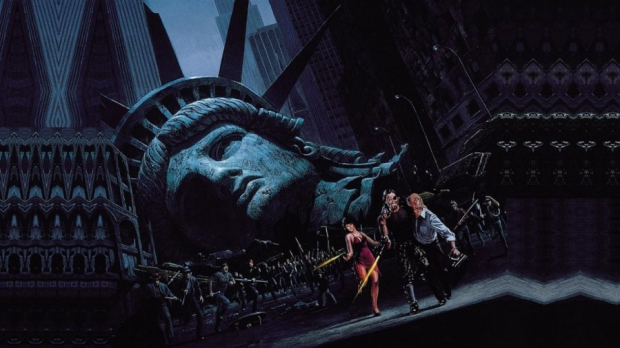 What was shaping up as the most intriguing bit of casting since Dwayne Johnson was cast as The Tooth Fairy has unfortunately bitten the dust. Naughty-girl comedian Amy Schumer was all set to star as iconic doll Barbie in a fully authorised, live-action comedy film, and had made clear to cynics expecting a satire of her respect for the doll and its role in the childhood of several generations of women.

The pull-out has been put down to nothing more than the usual ‘scheduling conflicts’ and the film is now in search of a new blonde to lead the show, which would show Barbie being exiled from Barbie Land and sent to fend for herself in the real world. Scheduled for release June 2018 the hunt is also on for a director.

In yet another sign that common sense is dead, the chief sods responsible for this year’s Oscars disaster, PriceWaterhouseCoopers, have decreed that phones – and presumably all cameras and digital devices of any sort – are to be banned backstage so that those people whose only job is to hand out the correct envelopes to the award presenters can focus on handing out the correct envelopes to the presenters.

In an arguably stupid decision, the Academy decided against firing the firm after PCW partner Brian Cullinan – a name now secured in trivia night quiz infamy – handed the wrong envelope to Faye Dunaway and Warren Beatty, who incorrectly announced La La Land as Best Film over the rightful winner Moonlight. (PCW has overseen Oscar voting since 1934.) Oddly, part of the solution is to have a third accountant up there, presiding over the other two. Jeeze Louise. Why not just have one person, with one box containing one set of envelopes so there is no possibility of a mistake?

SOLO’S REAL NAME TO BE REVEALED

As well as showing how he obtained the Millenium Falcon, the ‘stand alone’ Star Wars film about the young Han Solo – to be played by largely unknown young American actor Alden Ehrenreich (Stoker; Beautiful Creatures) – will also reveal how he got his famous name, and what his real one is. Odds on it’ll either have something to do with ‘going it alone’ or flying a ship ‘so low’. The film is set for release in May next year, hot on the heels of this December’s release of The Last Jedi, for which the late Carrie Fisher completed all of her scenes before passing away.

All’s fair in love and war and politics, and though it’s the job of the Democrats to continually rag on the Trump administration they really need to aim higher.

This week we had the desperate spectacle of the Dems seriously calling for a full inquiry into US treasury secretary Steven Mnuchin for quipping that people should go see the new Lego Batman movie. RatPac-Dune, a company he co-founded, made the film – Mnuchin is an executive producer – and when he jokingly recommended the film to an interviewer who asked for a suggestion, the Democrats fired off a fiery letter to the govermment ethics office demanding an investigation and disciplinary action.

Of course, politicians aren’t supposed to say or do anything in office that will lead to financial gain, but the full quote signals that Mnuchin was across the rules.

‘I’m not allowed to promote anything that I’m involved in. So I just want to have the legal disclosure; you’ve asked me the question, and I am not promoting any product…But you should send all your kids to Lego Batman.’

Know a joke when you see one, people.

‘ESCAPE FROM NEW YORK’ REMAKE IS ON

The long-feared remake of the 1981 John Carpenter cult classic Escape From New York now has a director and is all set to go. The prolific, multi-skilled Robert Rodriguez (El Mariachi; Desperado; Spy Kids; Grindhouse; From Dusk Till Dawn, etc) has been signed up by Fox, which is counting on their worker bee to turn the remake into a lovely franchise.

The original was a futuristic action flick set in 1997 – what should we call ‘futuristic’ films set in a year that has ticked over? Expired futuristic films? – in which Kurt Russell, playing tough guy Snake Plissen, breaks into New York City, which is now a maximum security prison, to rescue the US President (a brilliantly miscast Donald Pleasance). No word yet on casting, but if they’re looking for a prez, Barack Obama now has a lot of time on his hands and is apparently good in front of the camera. Just trying to help.

Whatever you say about Adam Sandler and his grade of comedy, you can’t argue with his ability to deliver – especially for Netflix. The world-conquering streaming service signed Sandler up for four exclusive films in 2014, two of which – the western parody The Ridiculous Six and The Do-Over – have screened to huge numbers. Now they’ve just signed his production company Happy Madison up for another four.

He’s happy, of course. Critical acclaim might have largely side-stepped Sandler, but as a producer his school of low-brow comedy has, according to Box Office Mojo, generated more than $5 billion worldwide. He came onto the scene in 1995 with Billy Madison and broke through in 1998 with The Waterboy, which amassed an amazing $280m (in adjusted dollars). His many detractors better buckle up for a long ride.

A lot of new blood swept out Kong: Skull Island, Logan and Hidden Figures from the top slots. The Disney bohemoth Beauty And The Beast predictably took out the top berth with a cool opening weekend take of $10 million from a super-wide release of 706 screens. At #2 came the animated shenanigans of The Boss Baby, taking $2m on 259 for its preview-bolstered total of $4m. Sci-fi thrill ride Life (#3) earned $1.1m on 305 while Power Rangers (#4) took a neat mill across 233.