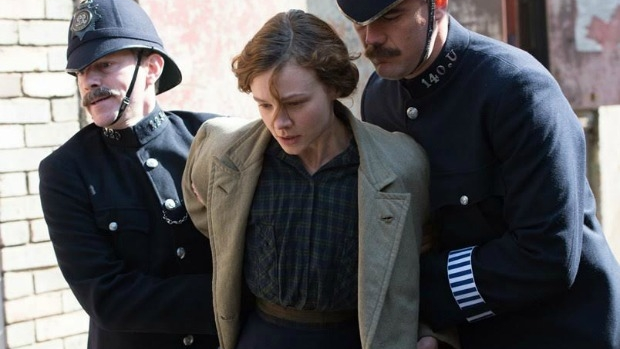 You just can’t get a break these days.

In promoting their hard-won, all-female film Suffragette, which recounts the fight for women’s voting rights in the UK, the cast – including Meryl Streep, Helena Bonham Carter and Carey Mulligan – donned t-shirts for a Time Out photo shoot that read: ‘I’d rather be a rebel than a slave’ – a pull quote from the film uttered by proto-feminist Emily Pankhurst (played by Streep).

That proved too much for some.

Never mind the libertarian spirit of the film, which director Sarah Gavron (Brick Lane) and writer Abi Morgan (The Hour; The Iron Lady; Shame; Brick Lane) fought for 10 years to get made without compromise.

The slogan was accused of belittling the contribution of African American women because of the word ‘slave’.

Furthermore, the film’s London premiere this week was marred by protests from the group Sisters Uncut.

The cast showed class by voicing solidarity with the protesters, even though they had inexplicably tried turning the film into their enemy.

Shouldn’t they have called first to set up a partnership?

On top of all this, Meryl enraged online feministas via a Time Out quote in which she refused to wear the feminist tag, preferring instead the label ‘humanist’. (This wily substitution is inspired by the quote from Pulitzer-prize winning playwright Wendy Wasserstein’s play The Heidi Chronicles, and the notion has attracted other high-profile subscribers, including Sarah Jessica Parker, Demi Moore, Susan Sarandon and Madonna.)

With pop culture figures including Marion Cotillard, Lady Gaga, Katy Perry, Taylor Swift and Shailene Woodley (in Time) also side-stepping the label, it seems the feminist brand is having more trouble than it can handle at the moment.

STUDIOS IN INQUIRY SIGHTS OVER SEXISM

Hollywood’s major movie-making sheds are apparently in the firing line of a nascent inquiry by the Equal Employments Opportunity Commission (EEOC) over long-standing complaints of sexism, particularly in regard to the hiring of female directors for big projects.

It comes partly at the prompting of the American Civil Liberties Union and though in its very early stages, directors are being letter-dropped for comment.

Important though the issue is, mounting a prosecutable case could prove an uphill battle.

By and large, studio heads aren’t stupid enough to entrust a huge movie project that could generate billions in corporate revenue to directors because of their gender.

They tend to go for track record and the ability to deliver a product that meets a huge shot list of very specific performance targets.

They don’t care if they’re male, female, Martian or whatever – all they care about is scoring an almighty return.

Given how they each tend to earn an average of a billion dollars a piece – and that’s before hitting the lucrative home market – it’s no surprise that uber-director/producer Michael Bay and the good people at toy giant Hasbro have announced that the Transformers franchise will continue for at least another four films.

On top of this, we’ll get a TV show and, possibly, a few more toy tie-ins.

Oscar-winning screenwriter Akiva Goldsman will preside over a team of scribes who are presently plotting out the ‘expansion of the Transformers universe’ (to use Hollywood parlance).

Though best-known for prestige projects such as A Beautiful Mind (for which he won his Oscar) and Cinderella Man, Goldsman has plenty of franchise experience having penned screenplays for the 1990s Batman films Batman & Robin and Batman Forever and the Divergent series.

Can’t wait. Especially for the reviews.

Yes, back in 2013 Steven Spielberg did indeed predict the fall of tentpole mega-films, saying: ‘There’s eventually going to be an implosion or a big meltdown…where three or four or maybe even a half-dozen mega-budget movies are going to go crashing into the ground, and that’s going to change the paradigm.’

But so as not to be misunderstood in foreseeing the end of the genre he helped create,  and to put a positive complexion on his new film Bridge of Spies, Spielberg finessed his statement by saying:

‘I simply predicted that (given the) number of blockbusters in one summer…there was going to come a time where two or three or four of them in a row didn’t work…I didn’t say the film industry was ever going to end because of them.’

He added that superhero films had a much shorter shelf life than, say, westerns, and that the movie market today was big enough to accommodate a wide spectrum of films.

Thing is, Spielberg had nothing to apologise for and was essentially right in the first place. If a season contains a long string of mega movies that bomb or don’t recover their costs, studios will obviously rethink their strategy – as they have done very recently.

When The Lone Ranger and Cowboys vs Aliens bombed, the word went out to people such as Jerry Bruckheimer that costs on films such as Pirates of the Caribbean 5 were going to have to be reigned in.

And they were. So Spielberg’s point is well-made.

Stellar bid: The gold bikini work by Princess Leia (Carrie Fisher) in 1983’s Return of the Jedi earned a cool $US96,000 at auction

Star Wars memorabilia never gets any cheaper, does it? At an online auction in California, Princess Leia’s Blockade Runner – the first ship we see in the original 1977 Star Wars film – drew a winning big of $US450,000. (Not bad for a 40-year old piece of plastic.)

Meanwhile, the gold bikini worn by Leia in 1983’s Return of the Jedi – made infamous by actress Carrie Fisher’s on-going on-stage jokes about it – was sold off for a mere $US96,000.

Complete with certificate of authenticity, of course.

No shocks here as the Matt Damon sci-fi epic The Martian took top spot with a killer opening week, taking $8.8m on 582 screens, neatly falling into step with its worldwide taking of $US113.6m.

Elsewhere on the booming local film front: the Aussie family charmer Oddball (#3) kept pace with another $2.2m on 297 screens for a hefty three-week total of $8.5m.