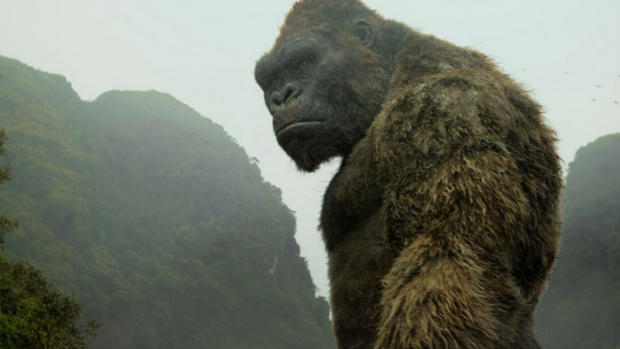 It’s all fun and games in this cheesy, over-sized action adventure jaunt as a group of largely clueless American scientists and soldiers investigate an uncharted, cloud-shrouded island that has followed its own evolutionary path.

It’s 1973 so they want to suss the place out before the Russians discover the place. What they find, of course, is a large monkey with a talent for punching attack helicopters out of the sky, something the war-loving commander (Samuel L Jackson) takes very personally.

As the survivors, lead by Tom Hiddleston (aka Thor’s bad brother) and veteran John Goodman, try finding each other they learn from a WW2 pilot stranded on the island (John C Reilly in fine comic form) that there is method to Kong’s fury, that he is actually protecting the surface from evil beasts that dwell in the island’s hollow innards.

Look, there’s some mandatory enviro-messaging amidst all the mayhem – don’t muck around with nature, respect the wild, man does not have dominion over the earth, stuff like that – but this really is a giant serving of joyful, disposable blockbuster mulch, full of lovely, mega-sized beasts – spiders, stick insects, bisons, birds – and desperate, trigger-happy soldiers who just want to make the rendezvous point so they can get off the island.

In a nod to the 1976 King Kong, Oscar-winner Brie Larson (Room) is on hand as a nature-loving, proto-greenie photographer to provide Kong with a bit of reciprocal romantic interest (in the brilliant 1933 original Faye Wray had absolutely no interest in the ape) but while her survival is pretty much assured – like dogs, pretty young women are not allowed to perish in monster movies – the yarn has the novel twist of knocking off major characters with no notice, so you never know who’s going to buy it next. It’s a neat touch to a largely predictable format.

In terms of spectacle, the film is essentially a glossy repackaging of stuff we’ve seen before, and first-time feature director Jordan Charles Vogt-Roberts – an American with surprisingly few runs on the board – does a swell job in preventing things from getting too slow or too serious.

The film, of course, is designed to start a franchise, so stick around after the credits for the sequel teaser.

Very solid wartime drama set in Berlin in 1940 in which a distraught father (Brendan Gleeson) reacts to the loss of his son in combat by mounting a tiny resistance movement against Hitler. Aided by his wife (Emma Thompson, reminding us what a fine actress she is) he writes seditious cards opposing the war and leaves them in random places around the city. On his trail is a wily detective (Daniel Bruhl) who is under increasing pressure from the SS to shut the dissident down.

Gleeson shines here as a man of few words who channels his anger into action, warning his wife after their first protest that they are now truly alone. Written and directed by veteran French actor Vincent Perez, the story is based on the 1947 book by Hans Fallada, which itself was based on real events.

Shot in oppressive blue tones, Alone in Berlin is another movie reminder that not all Germans were Nazis during the war. There were large resistence movements (as seen in the 2005 film Sophie Scholl – The Final Days), and many citizens, ruled by fear, merely hoped for their sons to return from the front in one piece.

Anyone with an aversion to jokes about farts or penises should steer clear of this consistently silly, defiantly enjoyable low-brow Aussie comedy. All else will enjoy the film’s breezy lack of pretense, love of cheap gags and occasional bursts of slapstick.

A direct sequel to Stephan Elliott’s 2011 hit A Few Best Men, this film, directed by Mark Lamprell, thankfully does not venture as far into gross-out territory, and while the humour is coarse, it is good-natured enough to feature trans-generstional sex along with a revealing performance by Shane Jacobson. The handsome but self-effacing Xavier Samuel returns and shows much better comedy chops than he did in Spin Out.

His life might have been cinematic but this choppy film certainly isn’t.

There’s no issue that David Stratton deserves tribute for his peerless work in helping establish an Australian film industry, but this largely uncritical valentine to the veteran film lover and movie critic feels like a primed-for-TV documentary. And, as it turns out, it is.

Directed by Sally Aitken, the film toggles clumsily between Stratton’s personal journey through life and his selection of outstanding Australian films. There are attempts to draw links between Stratton’s various phases and movie characters, but these often feel forced. So, too, are his visits to film locations, such as Hanging Rock, which mostly fall flat.

Peppered throughout are various notables – Bryan Brown, Russell Crowe, Sigrid Thornton, George Miller – putting their two cents in about Stratton, yet the film only skates through his life’s high points without offering a more sober assessment of his work, especially as a movie presenter for SBS – an important, formative chapter that gets no mention – and as a critic on TV opposite Margaret Pomeranz on The Movie Show (SBS) and At the Movies (ABC).

There is fleeting mention of the time he refused to rate Romper Stomper because he felt a ‘duty of care’ to his audience – it still sounds like tosh today – but the issue is dispatched far too quickly, with a few comments from director Geoffrey Wright and Crowe failing to nail the issue.

It’d be fine to sit through this love letter as a free-to-air TV special, but it’s hard to justify paying $20, especially given that the film is apparently edited from a three-part TV series Stratton will be presenting in May on the ABC. Had the film promised material we wouldn’t see in the longer TV cut there might be more incentive to check it out.

One of Hollywood’s most delicious pieces of folklore is here re-processed into absolute entertainment gold as Susan Sarandon and Jessica Lange slip into the layered frocks of Bette Davis and Joan Crawford respectively to recreate the long-standing feud they had to contain while making the 1962 black comedy Whatever Happened to Baby Jane?.

Set in a beautifully recreated Hollywood – all the gowns, cars, mansions, period technology and lush colours make it a delight to look at – their story is presented as an echo of the situation today where women of a certain age, regardless of talent or achievement, are junked.

The lead performances are fabulously fruity, with Sarandon biting deep into Bette’s reputation as a brilliant diva while Lange gives us a Crawford whose cunning is her main weapon. Alfred Molina does a great turn as desperate director Robert Aldrich and Judy Davis is a scene stealer as notorious gossip queen Hedda Hopper.

With such a delicious premise, nostalgia buffs will love it. Those unfamiliar with the story should buckle up for a bumpy, sumptuous journey of discovery.