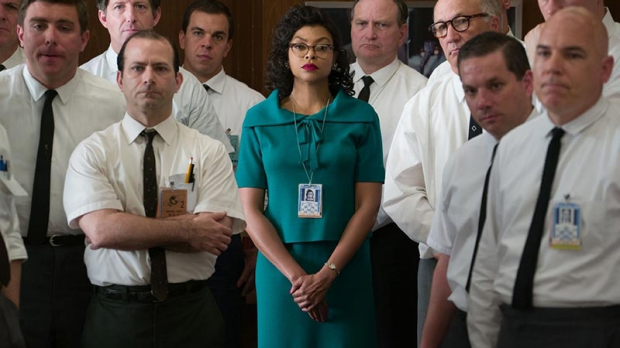 Made with more than a thankful sideways nod to Tate Taylor’s The Help comes a vibrant, sugar-coated valentine to the smart African-American women who helped NASA get its rockets into orbit in the early 1960s.

Toiling away in a bunker-like office in a segregated organisation, their initial, race-based confinement gradually gives way as their talents draw them deeper into the mathematical action needed to get the rockets off the launch pad and thus keep pace in the space race with the Russians.

The timid, bespectacled Johnson is the chief focus for the drama, recruited by their boss Al Harrison (Kevin Costner, in fine form) into a large, well-lit office full of latently racist, tie-wearing men in white shirts who either don’t notice or care that she divides her day between doing high-level calculations and trotting off to the blacks-only bathroom at the other end of the facility.

Directed with Oscar-baiting flourish by Theodore Melfi (St Vincent), Hidden Figures works well as a well-meaning, corrective history lesson designed to simultaneously honour the talented women who worked away in historical silence while castigating the system that oppressed them.

The three central performances are warm and necessarily up-sized to emphasize the inequities of pre-civil rights America. Predictably, this includes an over-wrought, all-but-mandatory moment here Johnson steps totally out-of-character in an impressive, screaming soliloquay to make sure everybody gets the point about how wrong racism is.

Far more effective are the less theatrical scenes of confrontation: Dorothy sustains her subdued, dignified demand for an overdue promotion, given how she is already performing the duties of somebody on a higher pay grade; Harrison bashes away at a ‘coloured only’ sign, not so much because he resents what it represents but because it is getting in the way of his mission.

As good as the central performances are, special kudos must go to Kirsten Dunst and Jim Parsons (The Big Bang Theory) who do fine, thankless work as the marginally racist white folk who must begrudgingly accept they live in a changing world.

As one of the greatest Chinese directors of all time Zhang Yimou has delivered a cache of deeply felt, humanist dramas such as Red Sorghum, To Live, Shanghai Triad, Raise the Red Lantern, The Road Home and the marvellous Not One Less.

Of late, however, he has gotten on board the bandwagon of FX-driven epics with such empty spectacles as Hero, House of Flying Daggers and Curse of the Golden Flower.

The Great Wall is his latest bid for multiplex glory. A Hollywood-China co-production that signals a new benchmark of synergy between the two movie cultures, it’s basically a fantasy monster movie starring Matt Damon and a few hundred thousand digitally rendered dragons.

Set back in the day when the Great Wall of China was a going concern, the film’s alternate history posits how the wall was built to keep these mean hordes of over-sized lizards from taking over China.

Delivering stilted dialogue, Damon plays a mercenary who is first captured by the Wall’s defenders before joining them in their expensive quest to vanquish the beasts.

Zhang Yimou stages some semi-impressive sequences as the swarming reptiles try mounting the wall in the face of bungee-jumping warriors, and there is a rather lovely moment involving over-sized floating lanterns.

Still, this is not a film that bears any of his signature traits that make him such a great director. That’s a big price to pay for the sake of making multiplex mulch designed for a big-box office take.

As one of the unarguable geniuses of American cinema, Martin Scorsese essentially makes two types of films.

There are those soul-searching works that explore the spiritual side of the human condition, examining the essence of religion and the psyche of the divine.

Then there are those films you can watch without losing consciousness.

Set in the 1600s it involves two Portugese Holy men (Andrew Garfield and Adam Driver) who go to Japan in search of a lost colleague (Liam Neeson). En route they are captured by unfriendly locals and have their faith tested.

And at nearly three hours, you will have your faith tested also. Certainly, the snail-pace of the film’s first half will get you feeling what eternity is like. It’s here you might find yourself thinking more about your up-coming grocery trip than the drama unfolding before you.

That said, Scorsese does build the drama and it does become more engaging, if not engrossing, as the stakes rise, with Garfield giving his all in a very difficult and demanding role.

It was a tough thing to pull off but Greg McLean and his crew have done an admirable job repackaging his 2005 horror film into a revenge-driven TV series.

In the badlands of the Outback an Amercian teenager (Lucy Fry) survives the slaughter of her family at the hands of the maniacal Mick Taylor (John Jarratt, whose sweaty performance has secured his place in the pantheon of big-screen bad guys). After realising the laid-back police officer in charge of her case (Dustin Clare) is unlikely to pursue the justice she craves, she steals the case file and sets out after Taylor on her own.

Oddly, the second episode (of six, with a second series to come) is more moody and methodically paced than the first, which seems in too much of a hurry to get to the killing. With quality horror it usually is a case of the slower, the better.

Fry makes for a terrific anti-villain as she hunts for clues as to Taylor’s whereabouts and Geoffrey Hall, cinematographer on the first two episodes, shoots with a love of sunbursts, silhouettes and horizon lines.