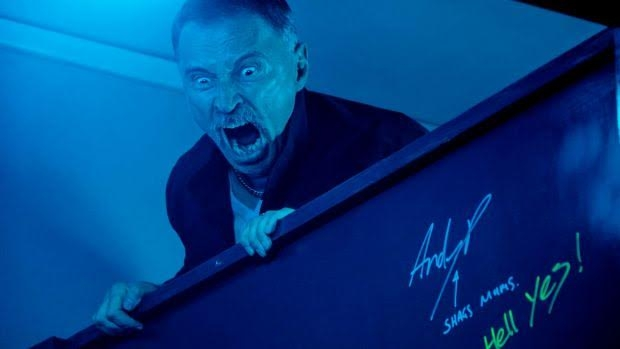 The gang from the 1996 neo-classic drug dramedy Trainspotting reassemble for an energetic, reflective, moving and superbly made sequel that updates the lives of the main characters 20 years on to see who has changed, who has tried to change and who hasn’t.

Not only do we get the return of hot-headed Begbie (Robert Carlyle), naive smack-addict Spud (Ewen Bremner), failed family man Sick Boy (Johnny Lee Miller) and the guilt-ridden Renton (Ewan McGregor), we also have the original’s screenwriter John Hodge and director Danny Boyle on board.

After suffering a heart attack while at a trendy gym, Renton is driven by conscience to re-establish contact with Sick Boy, who now runs a dilapidated pub, and Spud, whose drug habit is now so bad he sees little reason for living.

Begbie is off all of their radars, but they are not off his as he slips out of prison a little early while doing a 25-year stretch. Initially keen to get back into petty crime with the aid of his reluctant son (a lovely, understated performance by Scot Greenan), Begbie becomes obsessed with revenge after encountering Renton by chance at a nightclub.

Turns out that he never forgave Renton for running off with the 16,000 pounds from the drug deal that ended the first film. Neither, it seems, did Sick Boy, though his thirst for payback softens as Renton helps him in his endeavour to renovate the pub. And while Spud did get his share, he too blames Renton for ruining his life, who he says should have known he was just going to blow it on more smack.

Even though it is set 20 years on from the first film, T2 is not designed to stand alone but to please the legions of fans of the original Trainspotting. On that score it is an immensely satisfying film and a great example of how good sequels work.

Initially, echoes and images from the first film pepper the story, then become stronger as the story progresses, as if the past is reaching out at the characters and challenging them to acknowledge the importance of change. The superbly deployed device also makes the point that actions have consequences and that some regrets in life are unavoidable.

Though the overall style is necessarily more subdued to match the film’s more reflective mindset, Boyle still directs with great energy when careless thrills are called for. One very funny heist sequence is so well executed he makes us complicit in its success.

The performances throughout are replicated with astonishing detail and, in the case of Begbie and Spud, they’re so good you can barely understand what they’re saying.

Most sequels do assume a familiarity with the first film (obviously) and T2 is designed so that the more intimate you are with Trainspotting – and some fans can cite it like scripture – the more it will resonate. A perfect example is the single scene appearance of Diane (Kelly Macdonald), which hits like a thunderclap.

On that score, the Trainspotting team have managed to come up with one of the best examples of how good sequels work.

But does it work as a stand alone? To be honest, not really. But that doesn’t matter for a film intended to pay off on speculation about characters that has been brewing for 20 years.

Absorbing investigative documentary about the Melbourne-based cult run by Anne Hamilton Byrne that brainwashed children in preparation for the Apocalypse. Based on the book by director Rosie Jones and journalist Chris Johnston, the film blends ghostly archival footage of the Lake Eildon compound with interviews from former members, current members and Lex de Man, the cop who dug into the case. This is a story crying out to be turned into feature.

Fairly wet American comedy set in a struggling high school where one tough-as-nails teacher (Ice Cube) vows to beat up a wimpy colleague (Charlie Day from Horrible Bosses, It’s Always Sunny in Philadelphia) for getting him fired. The film features a lot of that specifically American semi-improvised style of comedic acting where the actors act as though they’ve either forgotten what they’re about to day, or have suddenly remembered it. Tracy Morgan (30 Rock) also stars. You’ll be better off waiting till this one hits the stream.

It won’t surprise fans of The Office or Extras that co-creators Ricky Gervais and Stephen Merchant share very similar senses of humour, especially when it comes to their stumblebum relationships with women.

What might surprise people, though, is that in 2013 Merchant produced a very funny TV series called Hello Ladies. Made for HBO it only ran one season, with a movie length finale to tie it all up. It’s an underrated gem of a show.

Merchant plays Stuart Pritchard, a love-lorn British web designer living in Los Angeles. His business is running smoothly enough to afford him a fairly plush house with a pool and a guest house, in which lives Jessica (Christine Woods), an attractive but struggling actress who can’t seem to get any career traction.

Though he lives a life of parties and nightclubbing, Stuart is a walking embarrassment when it comes to women. As with Gervais, his self-confidence evaporates in their presence as he tries putting on an act that he thinks will impress them.

The only time he is himself is when he is with Jessica. Romantic tension slowly builds across the eight episodes as Stuart strikes out with models, actresses and even an encounter with Nicole Kidman. He also confronts the phoniness he has to buy into if he is to make it with the cool set. This usually means abandoning his friends Wade (Nate Torrence), who is recovering from a separation, and Kives (Kevin Weisman), a wise-talker in a wheelchair.

All of Stuart’s suffering is self-inflicted as we witness, time and time again, what happens when somebody tries too hard. Jessica, too has her issues. Struggling with middle-age, she is sleeping with her agent who enjoys the sex but refuses to commit to her.

Co-written and co-created with Gene Stupnitsky and Lee Eisenberg, Merchant directed most of the episodes with a neat fix on the type of grounded humour that can quickly turn into drama.

It’s a sad sack sitcom well worth catching, especially if you are fans of Merchant’s work with Gervais.