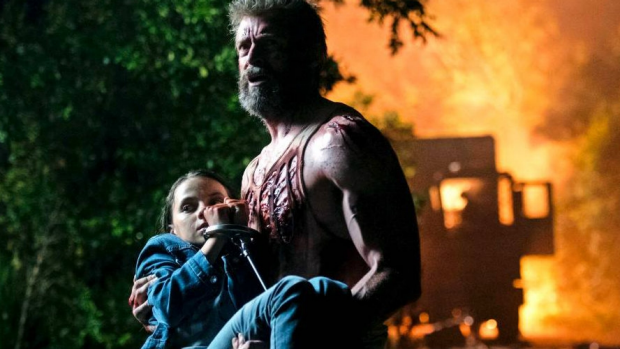 For all the effort Hugh Jackman has put into the action of his Wolverine sub-franchise it’s drama that provides the big pay-off in his final outing.

Branching off from the X-Men films, X-Men Origins: Wolverine (2009) and The Wolverine (2013) delivered a surprisingly decent amount of comic book action and story as Jackman’s mutant superhero – steel claws come out of his knuckles when trouble’s a’brewin’ or a soup can needs opening – slowly came to face his mortality.

In the closing chapter of the trilogy, however, the film – directed by James Mangold (he did The Wolverine and co-wrote this one) – pulls out all the stops to deliver an emotionally and viscerally satisfying experience. It works so well it easily qualifies as the best movie of the entire X-Men franchise as well as one of the best in the increasingly tired superhero genre.

Logan is, in essence, a post-X-Men movie. It certainly looks nothing like an X-Men movie: the sun beats down mercilessly; the images looks bleached; the camerawork is often rough.

It’s 2029 and almost all the mutants are extinct. Logan, an alcoholic who constantly gulps down medication, has a crap day job as a limousine driver.

Out in the dusty badlands near the Mexican border in a marvellously designed industrial shambles he lives with sun-shy fellow mutant Caliban (Stephen Merchant) and what’s left of the once-legendary Dr Charles Xavier (Patrick Stewart).

Man, have things changed. Once the X-Men maestro, Xavier is now a wreck, half-crazed and prone to seizures that shake the earth.

Pursued by reps from an evil corporation intent on cloning mutants, Logan finds himself in charge of Laura (Dafne Keen), a little girl who shares Wolverine’s slashing abilities and is targeted by the corporation. His job is to get her to safety across the Canadian border.

As has long been noted, superhero movies have an extraordinarily difficult time coming up with action sequences that look sufficiently different from what has come before. More often than not they look like they’ve all been snipped off the same master reel.

In Logan, however, the action is far more grounded and gritty. Visibly ageing, sporting a bikie’s beard and dropping f-bombs all over the place, Logan’s fights feel far more up close and personal. And because his slide into mortality is making it harder for him to withstand bullets the stakes are higher.

Tying everything together is a superbly crafted story about Logan’s begrudging awareness of his obligations and duties to others, especially Laura, who spends much of the film with her mouth shut, except when yelling in violent rage as she slices into villains.

Rare among comic book movies, there’s a real sense of purpose with Logan, a value-driven action drama with its powerful final gesture providing a controversial moral framing for the series, with a nod to the possible creator of the X-Men.

Having portrayed Wolverine across 17 years in films good and bad, Jackman has been smart enough to play into his advancing years rather than deny them. This has made for a dramatically rich final act, and one that ensures that he and the character go out on a high.

Solid, timely political drama in which the ceaselessly impressive Jessica Chastain shines as a win-at-any-cost Washington lobbyist. Sharply directed by John Madden (Shakespeare in Love; Best Exotic Marigold Hotel) the plot-heavy, dialogue-driven film strongly evokes what it is like living in a morally elastic atmosphere where the rules of conduct are driven more by convenience than conscience.

What a let-down this film is.

One of the central issues that has hobbled Australian films for decades has been the dire need for good story telling. As narratives unspool they need to make sense and ring true, both to the naked eye and the open mind. Most of all, they need to engage.

Regrettably, and despite the marked increase in the quality of local films over the past 15 years or so, Jasper Jones proves it’s still a sizeable problem.

Directed by Rachel Perkins (Bran Nue Dae) and based on the best-selling, multi-award winning 2009 novel by Craig Silvey (who co-wrote the screenplay with Shaun Grant), the story is set in a small Western Australian rural town in 1969.

Late one night a troubled and troublesome indigenous boy, Jasper Jones (Aaron McGrath), recruits a white kid, Charlie (Levi Miller) – a kid he’s never met – to help him in the commissioning of a major crime. There’s the dead body of a girl that needs burying.

Out of the blue, without question or reason, Charlie climbs out of his bedroom and willingly gets embroiled in Jasper’s horrific enterprise.

There’s no motivation for this instant complicity, no sense of why a white kid living a comfortable life would suddenly team up with an alienated black kid and take part in something that looks like it was dreamed up by Stephen King.

Kids do strange and stupid things in movies all the time, but that’s usually coupled with an understanding as to why. Stand by Me, Election and Breaking Away are just three examples.

But there’s nothing like that here and, sadly, the clumsy opening is typical of the rest of the film. To put it bluntly, Jasper Jones is a messy, often lazy attempt at a mystery-thriller that doubles as a coming-of-age story. It fails on both counts.

Try as you might to get into the riddle over a missing girl, the film’s story is pitted with plotholes of implausibility that continually take you out of the picture, robbing the film almost entirely of tension.

To list these in detail would give away too much of the story, but the film’s myriad flaws can be characterised as basic violations of common sense and consistency.

In this regard the film is all over the shop. Facts and events are established, then apparently forgotten. Behaviour patterns don’t make sense. A tone of dread and foreboding is established, then promptly  abandoned.

And heaven help anybody who casually watches TV shows such as CSI, NCIS and all those other police procedural programs involving forensics, because the film will test your patience. We allow for dramatic license in films, but Jasper Jones asks for a free pass that is too big.

There’s not even much sense of the racism that is supposed to afflict this small community in general, and Jasper in particular. He’s meant to be this local larrikin, but we get too little of his backstory. Given how almost everything is told from Charlie’s point of view, Jasper comes across more as a cypher than as a character. We needed more.

The ever-versatile Toni Collette does a great turn as Charlie’s mother – a woman frustrated on many fronts – and Hugo Weaving is all grime and gruff as the local hermit who hides a secret.

The film, however, rests on the shoulders of its three young lead actors, and this is where being a film reviewer gets hard.

As Charlie, though, Levi Miller – impressive in Pan and Red Dog: True Blue – seems too mature and assured for a kid going through all these changes. It’s the type of overripe acting we often see from American child actors, where they come across as miniature adults rather than as kids.

And while mediocre Australian films usually have some production values to admire, there’s too little of that in Jasper Jones.

There really needs to be a rule stating that vehicles appearing in period films should look like they’ve been driven around a lot. The ones here brandish showroom gleams.

And though the film is set largely between Christmas and New Year’s Day, the cinematography looks way too dank. This is an Australian film set in height of a Western Australia summer. So where is the sun?

Though your humble reviewer has always judged Australian films by the same standards as films from anywhere else – a dangerous practice, as it turns out – the pending release of a local film does nonetheless carries with it a special hope that it will be good.