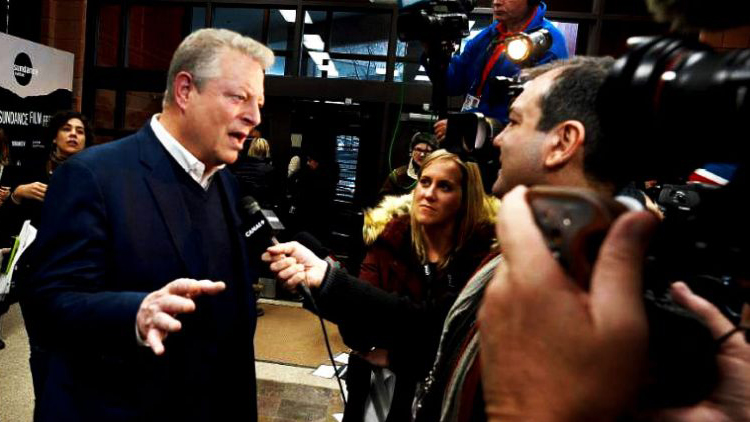 Above Pic: Enough about me: in the climate change documentary An Inconvenient Sequel Al Gore spends a lot of time talking about his favourite subject – himself.

AN INCONVENIENT SEQUEL: TRUTH TO POWER *1/2 (98 minutes) PG
Al Gore’s belated follow-up to his Oscar-winning 2006 global warming documentary An Inconvenient Truth is a surprisingly weak, slapdash piece of greenie propaganda designed to recruit for his beloved cause. While it again employs a big dollop of fear-mongering, the film does have something the previous film lacked – an actual hook.
Gore’s 40-year quest to encourage sustainable, clean power sources has finally been blessed with the one thing it has always needed, namely economic viability. Thus, the best moments in the film – scarce as they are – make the compelling case that once “clean” power – solar; wind; wave, electric, etc – becomes cheaper than traditional “dirty” means, the case for it will hit critical mass and become overwhelming.
If only the film had hammered and explored that issue more vigourously. Instead, it spends way too much time massaging Gore’s self-image as a Global Crusader, addressing conferences and hitting the phones. Using emotion rather than reason to further his cause, the film commits the very sin it accuses “climate deniers” of using.
It also skims over things that look too damned interesting. One still photo shots a hut with a solar panel on its roof; another shows kids using solar-powered laptops. This is what we need to know more about, not how frustrated Gore is at President Trump’s withdrawal from the Paris accord.
Ironically, the constant focus on Gore unintentionally makes this a film less about climate change and more about a politician’s dire need to remain relevant to a world he almost became the de facto leader of.
And there are moments that get under your guard. Regardless of what you think of Gore, it’s hard not to feel sorry for him the moment he finds out about the collapse of Paris.
That said, it’s really only his ego that’s been bruised, and though he narrates with a lot of reflection about the politics and the state of the world, he refrains from applying such critical reflection to the previous film, which was found by a British court to have contained nine significant errors of fact, even though it was being used as an educational tool in schools. No mention of that here.
Nor is there anyone in the film willing to bring him to account, something that seems to have become common practice. Indeed, the soft ride Gore gets in the film accurately reflects the largely sycophantic treatment he got from the media during his recent visit to Australia.
Documentaries that are driven by passion always run the risk of side-lining facts and clear arguments in favour of emotional high points and grandiose virtue signalling. That is certainly the biggest failing of Inconvenient Sequel. Put simply, its cause would have been served much better had it been leached of its activist impulses and kept its focus firmly on the issue, not on the celebrity politician who so desperately wants his name forever fused to the cause.

ANNABELLE: CREATION *** (109 minutes) MA
The cute star of the hit 2014 dolly-horror film Annabelle gets a terrific, politely terrifying, efficiently deployed origin story that explains in homely detail how the doll came to be possessed by the tortured soul of a little girl. Fans of the Conjuring series – this is the fourth installment based on the paranormal investigations of real life figures Ed and Lorraine Warren – will appreciate the film’s fidelity to the series’ straight-faced style – as opposed, say to the cheesy, comic horror of the Chucky movies – though hardcore horror fans will see some of the jolt moments coming.
It’s important to note how the original $6.5 million film took an astonishing $US260 million, despite poor reviews. Another sign of the critic’s decline, what?

THE WALL *** (90 minutes) MA
Very tense, tight exercise in single-locale filmmaking by director Doug Liman. Two American soldiers (Aaron Taylor-Johnson, John Cena) get pinned down by an enemy sniper who suddenly gets chatty with one of them over the radio. Liman does a fine job honouring the tradition set by Alfred Hitchcock in films such as Rope (1948), Rear Window (1954) and Lifeboat (1944) where the director is stuck in the same place as the characters.

VALERIAN AND THE CITY OF A THOUSAND PLANETS *** (137 minutes) M
French populist Luc Besson delivers a delirious, crazily plotted, visually over-loaded science-fiction fantasy epic clearly designed to top the whackiness of his 1997 film The Fifth Element. Starring Cara Delevingne and Dane DeHaan (an American actor unfortunately burdened with a voice that sounds like Josh Hartnett), the film follows them as they journey into the labyrinth of an artificial planet in search of creature that will help revive a race of Amazonian beings wiped out by a space war.
Despite the breakneck pace and myriad characters, the scatter-brained story isn’t all that hard to follow, and even allows time for a memorable cameo by Rhianna as a shape-shifting seductress.
The digital artistry on show here is truly astonishing, with some marvellous motion capture work on par with Avatar,  and like the latest Transformers film, is so encrusted with detail it really makes you wonder how hard the designers and artists worked on all the nuances. It really is wonderful eye candy.
As a side note, way too much has already been written about the box-office struggles this film has had. Made for around $200 million, it would have been close to a miracle for it to compete against all the American tentpoles. It’s likely to find a long afterlife once it hits the stream, though without much prospect of a sequel.

WIND RIVER ***1/2 (107 minutes) MA
Solid mystery crime-thriller set in the unforgiving snows of Wyoming where a laconic, tragedy-stricken Wildlife Service officer (Jeremy Renner) comes across the semi-naked corpse of a rape victim on Indian territory. Teaming up with a naive FBI agent (Elizabeth Olsen), the odd couple follow the clues in a cruel climate where track marks don’t last very long.
This is a by-the-numbers police procedural lifted by terrific central performances by Olsen and especially Renner, who looks very much at home punching his way agsinst the elements. The screenplay is by first-time director Taylor Sheridan, best known as an actor in Sons of Anarchy and for having written Sicario and Hell or High Water, for which he got an Oscar nom. People with an aversion to seeing graphic depictions of violence, especially against women, need be warned.

MIFF RECOMMENDATION – CITY OF GHOSTS
Outstanding, disturbing documentary that takes us inside the Syrian city of Raqqa to show what life under ISIS is like. Risking their lives at every turn, a group of citizen journalists known as Raqqa Is Being Slaughtered Silently pull every trick they can to get images and stories out about the oppression and atrocities being committed. The footage is often raw, and contains horrific scenes of actual executions staged as public events. The threat free media poses to ISIS is so severe they drive around with signal detector vans looking for internet connections. Underlying the importance of digital media to both sides in the war on terror, the film notes how ISIS adopted Hollywood production techniques so it could send polished propaganda to the world.
Filmed largely in secret, City of Ghosts serves as a testament to the courage of those willing to risk their lives to get the truth out to a world that wouldn’t otherwise know or care about what was going on.
Screens: Sunday 20 Aug 4.15pm, Hoyts Melbourne Central