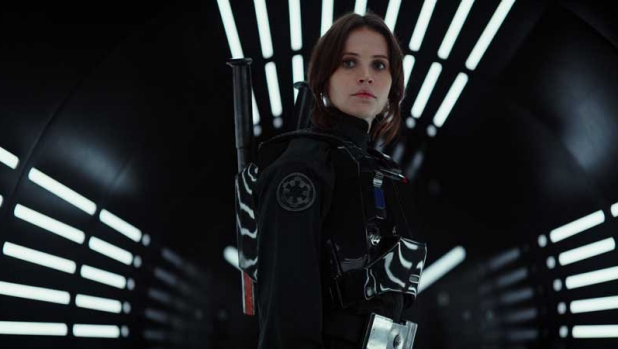 What a highly entertaining mess the new Star Wars movie is. Enjoyable almost in spite of itself, the film is the kind of loopy,  stumblebum spectacle you get when state-of-the-art visual effects collide head-on with the erratic sensibilities of a resolutely mediocre director and the crushing need for a studio to meet a release date.

Set immediately before the events of the original 1977 film, the story of Rogue One introduces us to feisty female anti-hero Jyn Erso (Felicity Jones), a space pirate who is recruited by the Rebellion to help locate her father Galen (Mads Mikkelsen). He has been taken by Imperial nasty Orson Krennic (Aussie Ben Mendelsohn in bad-guy mode) to be one of the designers of the much-dreaded Death Star.

Thus, Galen is regarded as an enemy – yet recent events suggest his conscience might be on the side of the Rebellion.

This premise provides the springboard for a sprawling space adventure that is at once sensational, silly, beautiful, baffling, enjoyable, irritating, marvellous and morally murky.

Indeed, the one huge favour everybody – hardcore Star Wars fans and normal people alike – must do for themselves is not to think too closely about the ethical motives of Galen because they do not hold up, not even under rudimentary scrutiny. It’s an example of the type of story flaw we often encounter in post-content cinema – of which Rogue One is definitely a part – where the more you think about it, the sillier the film gets.

The movie was directed by British Star Wars fanboy Gareth Edwards, who impressed some people with his low-budget 2010 debut Monsters before exhibiting his soul-free flair for empty-headed effects-driven epics with 2014’s godawful Godzilla.

It’s no secret that part-way through the making of Rogue One Edwards was instructed by the studio to change course. This involved reshooting scenes and lightening the film’s dark tone. To help, writer/director/producer Tony Gilroy (Michael Clayton; Nightcrawler; Bourne) was brought aboard as a screenwriter to add pace and depth to the proceedings.

This mid-course correction likely accounts for the film’s wild shifts in tone, sudden bursts of humour (often courtesy of a scene-stealing robot called K-2SO) and over-cooked moments of plot-critical melodrama that make some of those scenes between Hayden Christensen and Natalie Portman from the unfairly dissed Star Wars prequels sound like Shakespeare.

The film really is a monumental mish-mash where clumsy direction, bad editing and hollow characters are offset by enough brilliantly mounted, mega-scale battle sequences and nods to the original Star Wars film to get it over the line as a franchise entry that, while not entirely good, is good enough.

A major point that needs to be made about Rogue One is that all the talk about it being a ‘stand alone’ Star Wars adventure is complete tosh. Disney is pushing this line very hard and much of the media is swallowing it whole, yet the film is clearly a direct prequel to Star Wars: Episode IV (the original film).

Not only are the events in Rogue One woven deep into the fabric of the existing Star Wars narrative, the film actually takes you right up to the point where the original film begins! How on earth does that make it a ‘stand alone’ adventure?

In fact – and to be both frivilous and brutally frank – the chief purpose of this film is to address the huge plot hole from the first film, something that has been the subject of jokes and parody for nearly 40 years now.

To wit: why would anyone design a super-powerful weapon such as the Death Star yet build in a design flaw that would permit a single fighter to destroy the entire station with a direct hit on a very specific spot?

Well, you get your answer here. And for all the synthetic solemnity about ‘The Force’ that comes with Latter-Day Star Wars films, it’s a very tough sell, even to a forgiving audience.

It certainly keeps you light years away from taking Rogue One any where nearly as seriously as The Empire Strikes Back, the brilliant 1980 film that remains the franchise’s true jewel.

The splendid design work in Rogue One is an optical joy, whether it’s in the detail of the spaceships or the vastness of a landscape. Even demonstrations of the Death Star’s destructive power produce apocalyptic blooms of shattered crust that have a strange, mesmerising beauty to them.

Especially pleasing is how the film even preserves many of the design elements from the original film, such as graphics and screen displays. Old-school Star Wars fans – your humble reviewer being one of them – might find these tiny moments unexpectedly moving. Such is the power of nostalgia.

Still, there’s an old-style element Rogue One could well have done without.

When staged at close quarters action needs to be convincing, yet one consistenly irritating feature in the film is just how lousy Edwards is at managing clashes between the Rebels and Imperial Stormtroopers.

A long time ago, people used to joke about how easy it was for cowboys to kill indians. They never seemed to miss, and could even take down several indians with a single shot. It was such a well-worn joke even John Wayne made fun of it. The same thing with war movies and TV shows (anyone remember Combat?); American soldiers were capable of mowing down dozens of German soldiers with little effort, while the Germans never seemed to be able to shoot straight, even when lying in ambush.

Well, that principle applies to most of the fire fights and hand-to-hand smackdowns in Rogue One.

None of the rebels ever seem to miss their targets while the clunky stormtroopers rarely find theirs. (How can you instill fear across the galaxy when your soldiers can’t even aim their weapons?) Sometimes the rebels manage to knock off stormtroopers without bothering to look up. In fact, one Force-loving rebel character, Chirrut (Donnie Yen), is able to dispatch entire squads of stormtroopers even though he is blind.

Why make such a big deal on this point? Because it just looks crap and proves, yet again, how no amount of money can keep a film safe from genuinely bad filmmaking.

Another irritant: 3D. The situation is really getting sickening. Hollywood should stop producing films in 3D until they nail the process properly. As it is now, it’s still too imperfect.

If you can, see Rogue One in 2D. That way you won’t suffer the loss of image brightness, which, in one case, reduced a nocturnal battle sequence to a murky blur punctuated by orange fireballs and streaks of laser fire.

Also with 2D you won’t get distracted by all the ‘ghosting’ – where characters appear to have a double image following them around – or by the aisle lights reflecting off the inside of the frames and into your eyes.

For those brave souls who wear glasses and choose to see Rogue One in 3D by balancing their 3D glasses over their regular glasses, good luck and May The Force Truly Be With You.