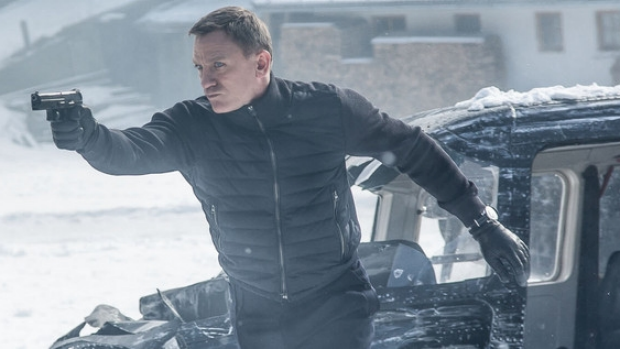 The opening reel of the new James Bond adventure Spectre is among the best the franchise has produced over its chequered 53-year/24 film timeline.

In Mexico City during the Day of the Dead celebrations Bond (Daniel Craig) accompanies a sexy woman to his hotel room, then excuses himself as he pops out the window, walks along the ledge of several buildings, arms up and takes aim at some bad guys.

As if to reassure us that this is not your grand-daddy’s Bond movie, director Sam Mendes (who did Skyfall; Martin Campbell did Casino Royale, Marc Forster did Quantum of Solace) stages this sequence as a single camera shot. Stunning stuff.

He then follows it with some edge-of-the-seat shenanigans in a helicopter that threatens to wipe out the crowd below. Marvellous.

Sadly, that’s the best of it, folks. From then on Spectre promptly plops into the quicksand of Bond cliches, undoing much of the good work of 2012’s Skyfall. What a shame.

The opening reel of the new Bond is among the best in the series. But’s all downhill from there.

Though not the best Bond film – we mustn’t forget Goldfinger, Thunderball, The Spy Who Loved Me or even The Living Daylights – Skyfall rightfully earned its place on the top shelf by pushing Bond into the 21st century, stripping him back to basics and side-stepping a lot of the lazy Bondisms that had built up like cinematic barnacles around the franchise over the decades.

With Spectre Bond defaults to the kind of bland, going-through-the-motions pap we saw in every Pierce Brosnan Bond except 1995’s series-reviving GoldenEye. It’s an exceedingly mediocre exercise in corporate filmmaking that often feels tired and lazy, just like Craig’s performance.

The wafer-thin story, such as it is, seeks to bind all the Daniel Craig Bond films with one over-arching narrative by raising the spectre of SPECTRE – the villainous, global Cold War institute of badness that featured in the early Sean Connery films. (The acronym stands for Special Executive for Counter-intelligence, Terrorism, Revenge and Extortion.)

The basic plot involves all the world’s intelligence organisations lining up to subscribe to a single inter-connected, super-secret global information matrix. Sound familiar? This is meant to make things more efficient and co-ordinated, as well as cut costs, including the expense of running the 007 program, which is tagged for termination.

Now, hands up anybody who doesn’t know whether putting all the world’s valuable, top-secret information under the control of a single super-computer is a good idea? It’s only one of a dozen signs in Spectre that Bond’s well of new ideas has run as dry as his martinis.

The main bad guy this time around is Christoph Waltz. Given his Oscar-winning performances in Inglorious Bastards and Django Unchained we surely had the right to expect a villain who would make us forget about how forgettable Bond baddies have been for the past 20 years. But he is as bland as a water biscuit with neither charisma nor humour. Two and a half hours you have to sit through this film – the longest Bond on record – and there’s barely a joke in it.

The central challenge for Spectre is the same that faces every new Bond film, namely: can it top what has come before? Some at least try. Here it’s more a case of ‘should we bother even trying?’. Almost everything in it pales next to older, better Bonds.

That’s especially the case when it comes to staging its signature action sequences, and it’s really irritating once you apply the ‘historical advantage’ rule.

Craig in his fourth outing as Bond.

To wit: for the film’s ‘big’ car chase one would have hoped Mendes and his crew would have looked at best Bond chase – from The Spy Who Loved Me – and think ‘hey, let’s use the 35-year advantage we have to come up with something that will beat this and blow people’s minds’. Spectre can’t even compete with contemporary rivals such as the Fast & Furious films, which have effectively appropriated the type of inventive, innovative action that was once a Bond hallmark.

Every other action sequence in the film, apart from that opener, suffers from the same syndrome. There’s even an explosion that stands as one of the worst examples of action movie direction in recent memory.

But never mind the action: where are all the great women? Or, at least, the interesting women?

Naomie Harris is good but unremarkable as a rogue Moneypenny, but aside from her all we get is a drab Monica Bellucci and the beautiful but spiritless Lea Seydoux (Blue is the Warmest Colour) as Bond’s vapid travelling companion. Where’s Lois Chiles – aka Moonraker‘s Holly Goodhead – when you need her? Or Maud Adams? Or Famke Janssen? What would Honor Blackman, who gave us the incomparable Pussy Galore, think of this lifeless lot?

And why couldn’t they replace Judi Dench with another female M? Nothing against Ralph Fiennes, mind, but was Maggie Smith busy? Helen Mirren? Vanessa Redgrave? Julie Christie? In fact, why not have Honor Blackman back for a cameo?

Yet the most telling point of reference for any new Bond film is not other Bond films but the 1997 Mike Myers Bond spoof Austin Powers.

In that film – which has grown in pop cultural value since it was made – Myers hilariously skewered a host of hoary old James Bond cliches. You’d have thought the Bond people would have taken note.

But – whoa! – they all pop up again in Spectre! For hardcore fans of the franchise it’s like a bad dream.

Most notable is that cliche of how the villain, rather than simply kill Bond point blank when he has the chance, instead ties him to some elaborate device or engages him in some mind game that gives 007 plenty of time to figure his way out. As crappy as that cliche sounds, it doesn’t just happen in Spectre, it happens twice.

And, as usual, Bond’s enemy is again graced with a team of idiotic henchmen who are graduates of the hallowed ‘line of sight’ school of movie security guards. That is, they only ever appear directly in Bond’s line of sight and dawdle in plain view just long enough for him to raise his weapon and fire.

And, needless to say, they never shoot straight.

All the self-referencing that has gone on in Bond films since 2002’s Die Another Day – the 20th Bond film and, thus, replete with references – has been fine when delivered in carefully measured doses. But with Spectre it seems the legacy has become something of a burden. After all, does reviving the name of Spectre achieve anything other than to give old-school fans a shudder of nostalgia?

The on-going wink-a-thon to the Bond of old really needs to be kept in its place, which is in the background to a Bond adventure that is fresh, exciting, inventive, topical and free to evolve into something less constricted, stuffy, repetitive and downright dull as the Bond we see in Spectre.

You can hear more of Jim Schembri’s movie reviews on Weekend Break (noon-6pm on Saturdays and Sundays).