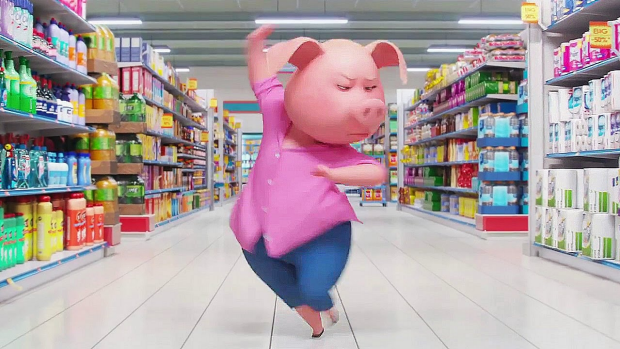 Anybody who doesn’t find Sing a wall-to-wall delight should check for a pulse. Written and directed by Garth Jennings and from the people responsible for Despicable Me and Minions comes a gloriously nutty, breathlessly paced, funny, uplifting musical that takes hold of you in the first few minutes and doesn’t let go.

Desperate to stay in business, theatrical producer Buster Moon (Matthew McConaughey voicing a cute koala) decides to hold a singing contest. However, he doesn’t realise the huge response it receives is because the prize money he intended to offer has gone out on the promotional flyer missing a decimal point.

Dancing pigs, a crooning rat, a soulful gorilla, hard-rock porcupines and a shy elephant who finds her self on stage are all just part of the colourful ensemble assembled here. And unlike Trolls, which merely features pop songs, Sing is a true musical in that the story is actually driven by music.

Of late, animation has tended to highlight each movie year, but this year we’ve been especially blessed with the bookending of Zootopia at the start of 2016, while Sing and Moana take us skipping into the New Year.

As if Zootopia wasn’t enough, Disney has graced us with another winning animated feature that is as heartfelt, visually delicious and socially progressive as any of their recent classics.

Based on Polynesian mythology, this ocean-faring epic comes from John Musker and Ron Clements, the Disney long-haulers who gave us The Little Mermaid, Aladdin, Hercules, Treasure Planet (still an underrated film) and The Princess and the Frog. And, aside from Mermaid, it might be their best effort yet.

The incident-packed story tells of an island girl, Moana (Auli’i Cravalho), who is beckoned by the ocean – yes, the ocean is a character in the film! –  to venture beyond the safety of her home and restore the ‘lost heart’ – stolen by a gargantuan demon beast – that will save her people from impending doom.

Accompanied by a comic-relief chicken (the one improvable element in an otherwise highly refined story) she is also assisted by Maui (Dwayne Johnson), a self-obsessed demigod who bears a remarkably 21st-century understanding of his own celebrity.

Aided by some fabulous musical numbers, the story moves at a cracking pace with some big-scale action sequences – such as the encounter with a gang of short-statured, mid-oceanic meanies – boasting some truly thrilling moments.

At the same time, the fine artistry of the animation extends down to the smallest detail, from Maui’s tattoos to the rendering of the water as it laps upon a beach. It’s so beautiful, you’ll feel cooled by it.

The heavy reliance on mythology and all the exposition it entails does result in some slower dramatic moments, but the film’s consistently comic tone will keep you from feeling overwhelmed by a sense of self-importance (something that afflicted Pixar’s Inside Out).

As for Moana, she makes for an inspiring centrepiece, the latest in a long line of Disney heroines that is simply unmatched by any other studio.

For all the unjustified ribbing Disney takes for its so-called embrace of the princess ideal – and didn’t those attacks run out of steam quickly? – no other outfit does so much to promote the notion of females as strong, feisty, independent, smart characters with universal appeal who can hold their own in any world, not just a man’s.

A very nicely packaged, historically based post-war romance from emerging director Amma Asante about the politically forbidden coupling between African royal Sir Seretse Khama (David Oyelowo, so good in Selma) and British commoner Ruth Williams (the ever-radiant Rosamund Pike). Essentially a two-lovers-against-the-world, the film scores for its touching performances and the balance between the romance and the volatile apartheid-driven politics that framed it.

From Robert Zemeckis (Cast Away; Back to the Future; The Walk) comes a perfectly enjoyable, tonally imperfect old-style wartime espionage romp. Brad Pitt and Marion Cottilard – an attractive teaming, what? – are allied agents Max and Marianne who fall in love during a super-dangerous mission and decide to marry and settle down.

The fly drops in the ointment when Max is told that his lovely wife is probably a spy and that, if so, he’s got to kill her lest he be done for treason.

Hokey? In lesser hands, perhaps. But if you buy into the glossy matinee-movie cheesiness of the premise you’ll easily forgive its length and just enjoy it for the throwaway popcorn pusher it is.

Zemeckis has never had trouble moving a film, and his love of camera work, mood setting and brisk editing give a great polish to Allied. Sure, he might not be at the top of his game here, but he is near enough to keep the mature-age audience the film is intended for very satisfied.

The umpteenth documentary about the wild, game-changing, tragically short life of hippie-era singer Janis Joplin turns out to be the best one yet.

Directed by acclaimed documentarian Amy Berg (Deliver Us From Evil; West of Memphis) the film carefully details (with reels of archival footage) the chronic insecurity that coursed beneath Joplin’s mammoth talent, and how her on-stage persona was the flip side of one of rock and roll’s saddest souls.

Fans will appreciate the care and respect with which the film was made. Newcomers will no doubt marvel at the portrait and wonder where the Hollywood biopic is.

The wonderful opening musical number, which takes place on a gridlocked LA freeway, sets the tone for the verve and wit that drives most of the well-mounted song-and-dance pieces.

Gosling’s spark for comedy is on show as director Damien Chazelle (Whiplash) propels his feel-good souffle towards a grounded, reflective conclusion where reality tries to make peace with hope.

As loving a valentine as the film is to old-school Hollywood, the rapturous, somewhat over-cooked reception it has received might be a collective reaction against Hollywood’s current trends rather than a reflection of the film itself, as enjoyable, breezy and ceaselessly entertaining as it is.

Those fans of the hit 2011 film Red Dog who have been living in quiet fear of this film will breath a huge sigh of relief after about 10 minutes when the realise the conceit of this prequel is to simply provide a backstory and not to out-do the original.

With Kriv Stenders again directing a screenplay by Daniel Taplitz, the origin tale about how the original Red Dog came to be takes a young city lad Mick (Levi Miller) and plops him in the Outback with his no-nonsense grand-dad (Bryan Brown, wearing the role like a cardigan).

Admittedly, the dog is less central to the plot than in the first film, which is geared more as a kids movie where the dog is merely part of an ensemble rather than as the driver of the drama.

Still, it’s pleasant, fun, funny and, of course, looks absolutely beautiful. The one thing you’ve got to say about the Australian Outback: it gives filmmakers great sky.

In a prime example of comic alchemy,  Bryan Cranston (Trumbo; Breaking Bad) and James Franco (Spring Breakers; 127 Hours) bounce off each other splendidly in a raucous, adult-only comedy where, once again, a naughty veneer encases a film with a healthily conservative message.

Laird is wild and crazy but basically decent, having no real faults other than being super-successful and respectful of Ned’s opinion of him. Indeed, one of the funniest things in the film how Ned finds Laird’s lack of real vice irritating. It’s as though he’s irritated by not having enough to be irritated about!

Director John Hamburg (Along Came Polly; he wrote the neo-classic comedy Meet the Parents) does an above-average job pushing transgressive comedy buttons – we spend a lot of time on the toilet in this film – while keeping it anchored to the relationship triangle between Ned, Steph and Laird. It’s a fine balancing act that comes off splendidly.

And for those already preparing to supplement their movie consumption by reading the values of Trump’s America into films – an amusing parlour game, to be sure – the final scenes of the film offer an eerie affirmation of America’s new-found conservatism.