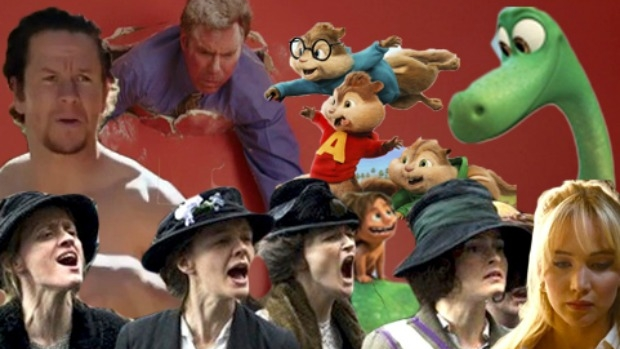 It has become a seasonal tradition as hallowed as gastric reflux that after the culinary excesses of Christmas, Boxing Day arrives with a swag of major film releases to help us all unwind, relax and, most importantly, digest.

But whereas previous Boxing Days have seen the release of major tentpole films, this year the offerings, while still very good, are somewhat more downbeat.

This is due, no doubt, to the wily pre-Christmas release of the all-conquering Star Wars: The Force Awakens, which, as expected, has captured the imagination of hundreds of millions of fans, along with a good portion of their disposable income.

Since its worldwide release on 17 December, the film, the seventh in the series, has taken around $690 million, smashing box office records left, right and centre.

Given that many people would either have seen Star Wars or might be eager to get away from all the saturation-level signage of spaceships, robots and light sabres, there’s a good selection of counter-programming designed to please adults and children, often at the same time.

Alvin and the Chipmunks: Road Chip (***; PG; 92 minutes) is the second sequel in the Alvin franchise and delivers precisely what is expected to its fans, catering to its younger fanbase with a series of funny musical numbers and physical gags, as well as a dabbling of more adult jokes for those go all the way back to the 1960s with these lovable, high-pitched rodents.

Eager for his surrogate sons to enjoy their childhood, their manager/father Dave (Jason Lee) gives them time off from their busy recording careers. However, his hot new girlfriend Samantha (Kimberly Williams-Paisley) introduces her nasty son Miles (Josh Green) into their midst, and chaos naturally ensues.

When Dave and Sam go to Florida for a romantic holiday, Miles and the Chipmunks go to war. But when they realise their parents might be getting married, the Chipmunks strike a ceasefire deal with their nemesis so they can head down and stop the proposal.

The super-high quality of the animation, which places Alvin, Theodore and Simon in the real world, remains a real highlight in these innocuous adventures – it really is an unrecognised art how brilliant the matching of movement and lighting are – with the usual message about family punched in for good measure.

Strictly for kids is The Good Dinosaur (**1/2; PG; 100 minutes), the lastest so-so offering from Pixar. Trying to prove himself worthy, a little dinosaur named Arlo becomes separated from his farming family and has to fight across the prehistoric landscape to find his way back. On the way he naturally befriends a human and encounters some helpful fellow dinosaurs on the way.

Alas, as bright and fast-moving as it is, The Good Dinosaur is very much a colour-by-numbers effort. Pixar has really covered this sort of territory so many times now that recurring themes such as self respect and being true to yourself and finding your own path through life and having courage in the face of adversity have become rote to all but the youngest Pixar fans.

And the animation, while certainly pretty, doesn’t really strive for the exceptional heights we were used to before Cars 2. This really is Pixar going through the motions.

Those who felt the comic spark between Will Ferrell and Mark Wahlberg in 2010’s The Other Guys will be more-than-pleased to discover in Daddy’s Home (***; PG; 96 minutes) that it wasn’t a fluke.

In this screwball lark, Ferrell plays a straight-laced, try-hard step-dad to a couple of unappreciative kids when their real father decides to step back into their lives.

With Wahlberg bringing just the right combination of smarm and musclehead cool, the two dads go to war trying to win the affection of the kids as well as the approval of the family matriarch, played stoicially by the versatile Linda Cardellini (Freaks & Geeks; Mad Men). She’s the rock amidst the mayhem, providing the all-important emotional earthing to the film’s high-key physical comedy.

This is the type of comedy Steve Martin would have made in his heydey. Strongly recommended.

The same can’t be said for Suffragette (**1/2; M; 106 minutes), a well-dressed but all-too-worthy period piece about the fight for equality and the right to vote in England during that poorly lit industrial era when everybody who wasn’t an aristocrat did their laundry in the street.

Carey Mulligan is the factory worker inspired by the actions of her friends and the leadership of Emily Pankhurst (Meryl Streep in a far-too-fleeting role) to take action.

Director Sarah Gavron and writer Abi Morgan manage a few stirring moments, but the ham-fisted performances and drifts into cliche keep this from being the powerhouse historical drama it should have been. One wonders what a brilliant social-realist director such as Ken Loach could have done with this

The best Boxing Day release by far is the fabulous Joy (****; M; 124 minutes), an unexpectedly engrossing factually based comedy-drama about Joy Mangano, the down-on-her-luck middle-American single mum who invented the Miracle Mop, amongst other things.

Set in the mid-1990s this is the latest collaboration between actors Jennifer Lawrence and Bradley Cooper and director David O Russell, who made American Hustle and the Oscar-winning Silver Linings Playbook.

Set in a deeply dysfunctional family, it’s a winning, warts-and-all account of how Mangano fought sexism, exploitation and innumerable set backs to get her mop on the Home Shopping Network, which was just starting to make its impact.

Consumed by a defiantly triumphant drive, Lawrence out-does herself here as a domestic heroine intent on not only being heard, but being respected by her business associates aswell as by her ever-disapproving father (Robert De Niro).

Cooper’s cool-as-a-cucumber performance as a powerful product buyer brings a sense of real and much-needed gravitas to a movie premise that might otherwise have been tough to take seriously.

For him, providing quality products to consumers is both a science and a religion, and Joy’s strange-looking plastic contraption has a lot to prove before he will endorse it to the American people.

To his credit, Russell, who also wrote the screenplay, uses humour to get the story going yet never allows it to undercut Joy’s struggle to get her invention to market, and to get herself recognised as a true against-the-odds champion.