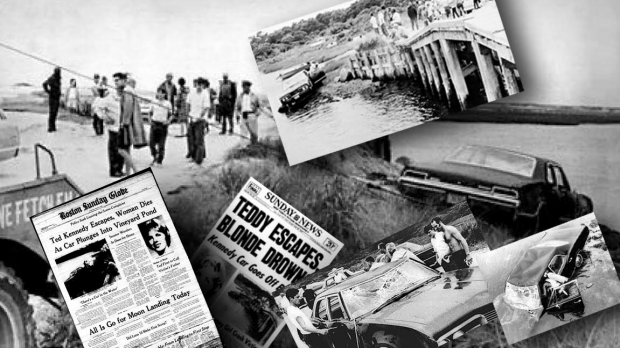 Despite the massive return on Fifty Shades of Grey – $US570 million for a paltrty $40m film – director Sam Taylor-Johnson has turned down the chance to do the lucrative sequel so she can make a mystery-drama about that night in July, 1969 when US Senator Ted Kennedy lost his female passenger Mary Jo Kopechne while driving through the Massachusetts island of Chappaquiddick.

Occurring just a few days before the Apollo 11 moonshot, the nation-consuming scandal claimed Kennedy’s career. The 28 year old Kopechne, a hard-working Kennedy campaign worker, drowned when he took a wrong turn and ran his black 1967 Oldsmobile Delmont 88 off a narrow bridge and into the river. Kennedy managed to escape the car and swam off while the trapped Kopechne drowned. He didn’t report the accident for nine hours, despite there being houses only a few metres away from the accident site.

It remains a disturbing political mystery surrounded by a halo of suspicions and unanswered questions. The claim that the filmmakers will strive to show the true story behind what Kennedy endured has already raised hackles over fears the film might be sympathetic to a man who millions still despise.

The ridiculous success of Disney’s Marvel studio has prompted Paramount to hook up with toy behemoth Hasbro with a view to enhance the revenue streams of toy lines such as GI Joe, Micronauts, Visionaries and MASK, along the lines of their Transformers strategy, which has made a neat $4 billion thus far. It’s the movie world we live in, folks.

JEDI RANKS SWELL ON BACK OF EPISODE VII

With the global release of Star Wars: The Force Awakens has come a corresponding jump in the ranks of those who consider ‘Jedi’ their religion. The Church of Jediism in the US is signing up about 1000 light-sabre loving people a day to its standing army of 250,000. The UK contains about 300,000 people who claimed ‘Jedi’ as their religion on their census forms, and even New Zealand has its own Jedi Church. Wonder how long it will be before somebody seriously organises these fans into a true Force.

Given that the last Hunger Games film has taken a handy $573m, bringing the franchise’s rally to around $3 billion, it’s no wonder the studio wants to keep making more. But outspoken star Jennifer Lawrence recently told Variety that not only wouldn’t she be involved in any prequels, she wishes they’d wait a decent while first before proceeding. ‘I think it’s too soon. They’ve got to let the body get cold, in my opinion.’ she said. And well said.

Biding its time before the expected onslaught of Star Wars: The Force Awakens, the Australian box office kept The Hunger Games: Mockingjay Part 2 at the top as it took another $2.9 million on 415 screens for a four-week total of $26.4m. Hotel Transylvania 2 (#2) enjoyed an audience average boost of 20% as it took another $2.4m on 362 for a three-week haul of $7.5m. The school holidays also saw audience boosts for Love the Coopers (13%), Bridge of Spies (33%), The Martian (28%) and Truth (22%).

Of special interest, Aussie charmer Oddball (#19) enjoyed a huge jump that kept it from leaving the Top 20. The film saw a highly unusual audience average spike of 98%, taking another $42,811 on 41 screens for a 13-week tally of just on $11 million. And this despite the fact the film is on DVD.