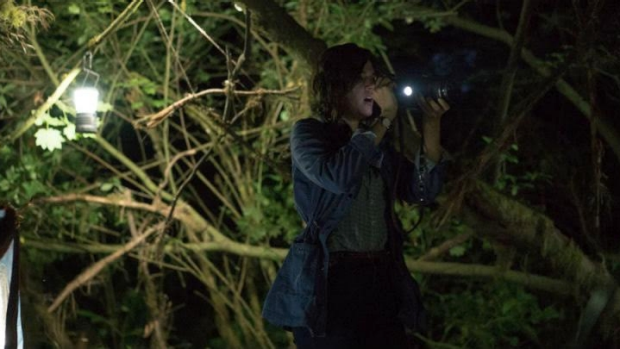 Back into the creepy, tangled woods we go, folks, and what a surprisingly strong nerve-shaker it is, the signature shakycam notwithstanding.

This time around James (James Allen McCune), the brother of Heather (Heather Donahue) – who lead the ill-fated witch-hunting expedition in 1999’s ‘found footage’ classic The Blair Witch Project – goes off in search of his sister, hoping she is somehow still alive.

As with the original, it’s part of a school media project so there are friends in tow filming everything with their off-the-shelf video gear, including a drone.

Also along for the ride are some hillbilly guides making their own doco, suspiciously shooting on 1990s videocams.

With any memory of 2000’s execrable Blair Witch 2: Book of Shadows now confined to those few unfortunate souls who saw it, Blair Witch proves itself a very effective updating of its parent, with one particular subterranean sequence generating a rare degree of genuine fear.

Great to see another top-notch scarefest so soon after Don’t Breathe.

The great thing about this not-very-anticipated second sequel to the chick-flick classic Bridget Jones’s Diary is that everyone involved seems to have expected normal filmgoers to be deeply suspicious of it, given how mediocre 2004’s Bridget Jones 2 was, and the fact that Renee Zellweger’s much-publicised facework has her looking like somebody else.

Wisely, all that has been factored in by director Sharon Maguire (returning after helming the original) and the A-list triad of writers Dan Mazer, Emma Thompson and Helen Fielding (author of the book that started all this off) to deliver a spright, persistently funny look at a woman flailing in a comic swirl of mid-life turmoil.

Former lover Darcy (Colin Firth) is still on the scene, but now there’s self-help guru Jack Qwant (Patrick Dempsey, aka McDreamy from Grey’s Anatomy), each of whom Bridget has relations with and either of whom can be responsible for the being growing inside her.

Bridget is in her mid-40s here, so what the filmmakers now need to do is commit to one more film where we see Bridget in her 60s trying to bring up a 21st century teenager.

And they don’t have to wait 15 years to do it. Some prosthetic make-up on Zellweger’s already altered visage and a touch of futuristic design and we’re there.

Eventful, issue-driven, well-mounted if somewhat gloomy reinvention of the ‘lost’ 1977 Disney family film, which was remarkable for its pioneering fusion of live action and traditional cell animation (about a decade before Roger Rabbit, which was happy to hog a lot of undeserved credit.)

After a car prang, sole survivor Pete (Oakes Fegley) is brought up in the remote woods by a large green dragon called Elliot, which has been the subject of district legend.

When the boy is discovered the folklore becomes reality and the race is on to either protect the dragon or capture and exploit it as local logging industry bods lock heads with green-leaning cops.

Fans of the original should beware this is not a jaunty musical set among hillbilly caricatures in 1900 backwoods America.

The CGI also robs the film of the degree of invention necessary in the analog era.

A valiant attempt at a broad Aussie comedy, co-directed by Marc Gracie and Tim Ferguson who set their formulaic rom-com at a raucous B&S Ball after a ute muster.

Billy (Xavier Samuel) is the dyed-in-the-wool country boy while Lucy (Morgan Griffin) is the reluctant county girl eager to escape to Sydney.

Can he win her back?

Will she be given reason enough to change her mind?

All must be resolved over the course of the ball – yes, most of the film is set in the one locale – as they test each other’s romantic resolve.

The film can’t be faulted for its ambition – the constant embracing of rural caricatures is clearly meant to be endearing – but the gags are either too weak or too vulgar to lift it.

Example: one character spends a good slice of screen time covered in fecal matter, giving the movie a totally unnecessary edge of repulsion.

To its credit, the film is getting the type of marketing push that has eluded so many recent Australian films, so hopefully it will find the audience it is working so hard to please.

It’s also opening on a non-blockbuster weekend, another promising sign.

*Check out our video interview with Tim Ferguson.

So soon after Tusk comes another dire comedy from the once-wonderful Kevin Smith (Clerks; Chasing Amy; Red State) who has apparently lost all interest in maintaining his once-powerful connection with his fanbase of nerds, geeks, dweebs, undergraduate slackers and other outsiders.

It’s aimless, sloppy, low-budget garbage that will prove especially painful to endure for long-time Smith fans. Where did all that zeitgeist savvy go?