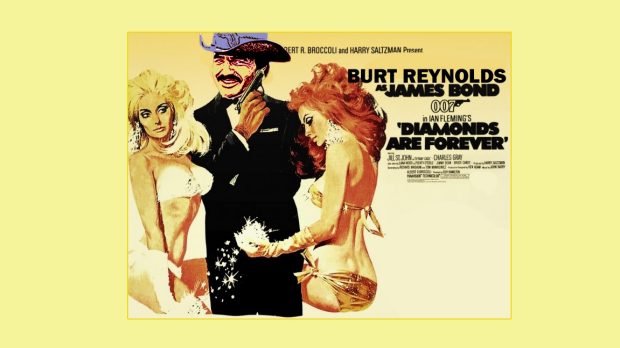 While on the demanding press trail to push his autobiography But Enough About Me, movie star legend and unstoppable gag man Burt Reynolds, now 79, is gleefully revisiting two of his biggest mistakes: saying ‘no’ to a formal offer in 1970 to play James Bond in Diamonds Are Forever – this was before he became famous via Deliverance – and, a few years later, telling George Lucas ‘thanks, but no’ regarding the role of Han Solo in Star Wars.

On 007, Burt recently told Good Morning America: ‘In my stupidity I said, ‘An American can’t play James Bond, it has to be an Englishman…Nah, I can’t do it.’ Oops. Yeah, I could have done it.’

Given the present-day resistance to casting anyone other than a white male Brit as Bond, imagine how different people’s thinking would be now if Burt had said yes way back when?

As for playing Han Solo, Reynolds was actually in the right place at the right time in the mid-1970s. He was on the verge of becoming the world’s biggest movie star – he then held that title from 1978 to 1982 – and appearing in Star Wars would have been great for him and Lucas.

‘I was busy, but I wasn’t so busy I couldn’t have done it,’ Reynolds recalled, hopefully not thinking too deeply about how his personal history would have changed.

With French producers all set to remake Nicholas Roeg’s 1972 classic Don’t Look Back, the film’s original star Donald Sutherland has some sage advice to offer, free of charge:

‘Don’t embarrass yourselves by making it….It was a piece of work indelibly written by Nicolas Roeg. It’s about a family. It’s about death; about having a child pre-decease you. It’s about love. It’s about extra-sensory perception.’

The haunting film, notable for its use of the colour red, featured Sutherland and Julie Christie as grieving parents trying to cope with the tragic loss of their daughter. Widely regarded as a classic, Sutherland’s anger at the prospects of a remake spills over into bewilderment.

‘Why do they do it? It’s just people wanting profit…It’s shameful. They should be ashamed of themselves.’

Accepting his honorary Oscar last Saturday, headline-loving director Spike Lee (Do The Right Thing; Jungle Fever; Girl 6 etc) instructed the industry to ‘have some serious discussions about diversity and get some flavour up in this. This industry is so behind sports it’s ridiculous.’ Co-presenter Denzel Washington (who played leads in Lee’s Malcolm X, Mo’ Better Blues, He Got Game and Inside Man) said from the podium that ‘Spike Lee has put more African-Americans to work in this business than anyone else.’ In a memorable line, Lee at one point opined how ‘it’s easier to be the president of the United States as a black person than to be the head of a studio.’

Lovely stuff. Our return serve to Lee: stop talking, pick up a camera, make a movie about it.

As sad as the 2013 death of Fast & Furious star Paul Walker was, it was inevitable the unlawful death case filed by his daughter Meadow Walker against Porsche would get ugly. She claimed the Porsche he was in when he died had faults. The response from PCNA (Porsche Cars North America) was very direct:

‘PCNA alleges that Mr Walker knowingly and voluntarily assumed all risk, perils and danger in respect to the use of the subject 2005 Carrera GT, that the perils, risk and danger were open and obvious and known to him, and that he chose to conduct himself in a manner so as to expose himself to such perils, dangers and risks, thus assuming all the risks involved in using the vehicle.’

The latest James Bond spectacle Spectre opened at #1 with a shaken, not stirred take of $14.4 million on 618 screens. Worldwide, the film has taken $US550 million since it opened on 6 November, meaning the $245m film is edging into profit. (Most big films have to make 80-100% over their production budgets to make a buck.) Elsewhere, the documentary He Named Me Malala (#13) took $81,670 on 38.