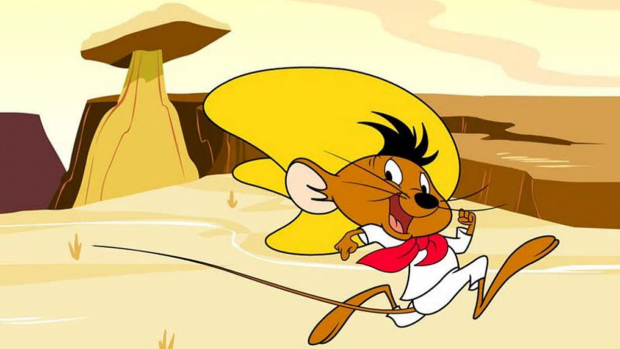 SPEEDY TO HIT THE BIG SCREEN

Move over, Mickey. Speedy Gonzales, arguably cinema’s second most-famous animated mouse, is to hit the big time in a feature film from Warner Bros. Speedy, who won an Oscar in 1955 for the self-titled Friz Freleng short, will be voiced by Mexican actor and film-maker Eugenio Derbez. There was word of this film back in 2010 with Mexican comedian George Lopez, hot from his hit sitcom, attached. There is no word whether the renewed interest in the film is at all related to presidential hopeful Donald Trump’s remarks about America’s fragile relationship with Mexico.

Noted Australian filmmaker, screenwriter, playwright, film critic and legendary grump Bob Ellis has sadly passed away, age 73. Among his most notable film works are: Newsfront; Goodbye, Paradise; Fatty Finn; The Nostradamus Kid; Warm Nights on a Slow-Moving Train; Man of Flowers; and My First Wife. He also wrote the acclaimed 1988 mini-series True Believers. When speaking about others Ellis did have a lacerating tongue that was at odds with the eloquence often found in his work. One of the regrets with his passing is that he did not spend more time making movies.

The ill-fated Terry Gilliam film The Man Who Killed Don Quixote – its doomed production chronicled in the remarkable 2002 documentary Lost in La Mancha – has finally gotten the money it needs to be reborn. But it will be a new baby, using none of the footage Gilliam shot with Johnny Depp.

With his $20 million budget, Gilliam will reshoot from scratch, with a new screenplay, and with John Hurt and Jack O’Connell replacing Jean Rochefort and Depp in the lead roles.

Here’s hoping Gilliam will have a producer strong enough to contain his temperament and artistic excesses so he can focus on getting his daily shot list done before losing the light.

The best-selling novel Doctor Sleep, horror master Stephen King’s 2013 Sequel to The Shining, is to be made into a film. (No surprise there). In the story Danny, once chased by his axe-weilding dad, is now a mixed-up middle-ager who communicates telepathically with a 10-year old girl. What could possibly go wrong?

Screenwriter Akiva Goldman (A Beautiful Mind) is set to adapt. Though there’s no director yet, King will produce, as usual. He began doing that after hating on Stanley Kubrick’s The Shining in 1980. King even went on to make his own, very good TV mini-series version in 1997.

Three cheers for Charlize Theron for demanding she get equal pay with Chris Hemsworth for appearing in The Huntsman 2. That’s a chunk of change worth around $10m. She’s also lashed out about how she doesn’t get enough acting work because she’s so beautiful.

Hot off her non-glamourous triumph in Mad Max: Fury Road, Theron told GQ: ‘Jobs with real gravitas go to people that are physically right for them and that’s the end of the story. How many roles are out there for the gorgeous, f-ing, gown-wearing eight-foot model?’

A beautiful woman complaining that her beauty restricts the number of $10 million roles she gets. Talk about first-world problems, people.

Also, she’s just landed a big role in Fast & Furious 8 as the main villain of the piece. She ought to find out if her looks had anything to do with her casting. If so, she could make a big noise about rejecting the role on principle. You know, just to make a point.

Allowing for the possibility that she’s been misquoted, it’s hard to make sense of these comments. She uglied up for Monster in 2003, a role that won her an Oscar. If she really thinks her beauty puts the better roles out of reach she knows what to do.

With no post-Easter competition the megolith of Batman vs Superman: Dawn of Justice – or Batsoup, for short – remained securely at #1, taking another $6.1 million on 550 screens for a two-week total of $24.3m. Significantly, though, the per-screen audience drop off was a massive 66% (double what’s normal), which is reflecting the worldwide trend. This indicates very bad word-of-mouth is biting into the box office.

The only new release of the week was the fine Australian documentary Sherpa (#12), which took an impressive $173,500 on 28 screens.