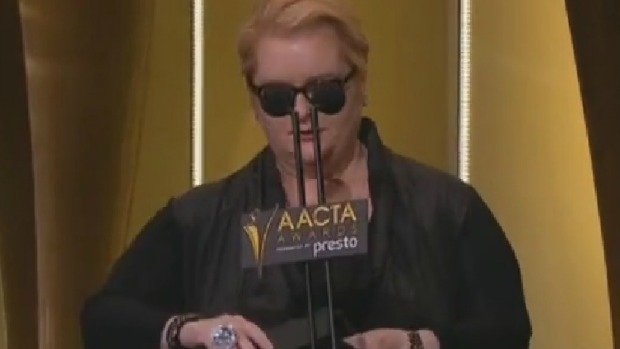 It wasn’t exactly a ‘night of nights’ as Australia’s film and TV industry gathered this week for the 5th AACTA awards. In yet another muddled, low-rating ceremony – when will they get it right? – the big film winners from the lacklustre, blink-and-you-missed-them presentation were:

Kate Winslet, who deserved her bug-crusher for best actress for The Dressmaker;

Hugo Weaving and Judy Davis, who took Best Supporting Actor and Actress respectively for The Dressmaker. (Apologies to Mark Coles Smith who really should have won for his wonderful work in Last Cab);

The fad-tapping That Sugar Film, which somehow took Best Feature Documentary over Michael Ware’s searing, more-deserving war doco, Only the Dead (though it still managed to pick up doorstops for best direction, best sound and best editing);

And, of course, the unstoppable, world-conquering, more-than-worthy Cate Blanchett, who was awarded the Longford Lyell Award in a prolonged segment that, at one point, threatened to go on indefinitely.

Though most of the awards wound up in the right laps, Best Film remains a bit of a joke. At the 4th AACTAs in January we had the embarrassing spectacle of Best Film going to two films: the huge grossing The Water Diviner and the high-quality, low-grossing spook movie The Babadook.

It seemed like an attempt at having your cake and eating it too, by recognising two such different films in one breath. The indecision was hard to take seriously.

But rather than move on from that debacle, the sudden introduction of the ‘People’s Choice Award’ for Best Film – which essentially allows for two films to walk away with a ‘Best Film’ award each year – appears to consolidate the problem. Even if a film feels as undeserving of the gong as Fury Road, just have the one award for Best Film and stick to it. Don’t try to cover your bets with two.

As for the show itself, this year’s shebang was a typically slap-dash production that simply failed to fascinate. The ratings were dire, ranking 21st with a five-city total of – gulp – 419,000 viewers (behind Hot Seat and repeats of Modern Family).

This strongly suggests that the time has come to either take the AACTA awards seriously or to take them off the air.

For if there was a year when they should have been taken seriously it was this one. It’s been a banner year for Australian cinema – with quality films matched by huge box office – and we needed a classy event to reflect that.

In addition, we had cringe-inducing sponsor plugs, multiple pleas for AFI members and Stephen Curry trying hard to be funny about a dud comedy he made in 2003 that nobody remembers.

These stumble-bum antics sat awkwardly alongside acceptance speeches that were often moving and heartfelt. Kudos to Caton,  Sue Maslin and especially Ky Baldwin (who won for the Peter Allen mini-series) for their lovely words.

The telecast’s chief problem is a long-standing one: the whole affair comes over as a lumbering, poorly paced insider’s party, not something designed primarily for home viewers. Even the Blanchett tribute was sloppily produced and, at 13 minutes, way too long.

It’s been said before and needs to be said again: to gain traction and relevence with the general audience the AACTA Awards need to go from being an industry love-in to a properly managed public event.

There were more than enough big, well-known Aussie films to draw in a decent viewing audience. And however overrated history will judge Mad Max: Fury Road to ultimately be, the film nonetheless did a splendid job selling Brand Australia internationally.

Yet all that could be mustered for this show was the annual serving of mediocrity, its signature clumsiness now so predictable the AACTAs ought to be renamed the AWKWARDs.

This was a prime opportunity missed. And it didn’t help that the ceremony was rescheduled to take place before Christmas, rather than in eartly 2016. The least they could have done was let people know. It’s a fair bet that come January a lot of film fans will be wondering where the awards went.

And please, could somebody please get a better adjustable microphone? For tall talent it was no problem, but poor Magda Szubanski often looked like she had two black holes forming on her face. She deserved better. And so did the show.

Having been cancelled due to funding difficulties, the influential short film festival Tropfest will continue on, thanks to CGU Insurance. The event returns on 14 February in Centennial Park, Sydney. Creator John Polson can now finally get a full night’s sleep.

Ricky Gervais will reprise his classic character David Brent from The Office via a mockumentary feature called Life on the Road, due on screens late in 2016.

Having long left the Wernham Hogg paper products company, the tour film will track Brent’s life as the lead singer for the band Foregone Conclusion, as well as cover his new job as sales rep for Lavichem, a Slough-based company that specialises in products for public lavatories. Brent’s specialty: urinal lozenges. To help ward of fears that some might see this as a cash-in exercise, Gervais has insisted that Life on the Road is not strictly an Office movie. Oh, admit it: either way, you want this film.

At a guess, this dominance is likely to end once Star Wars: The Force Awakens opens to cash in on a solid year’s worth of market saturation.