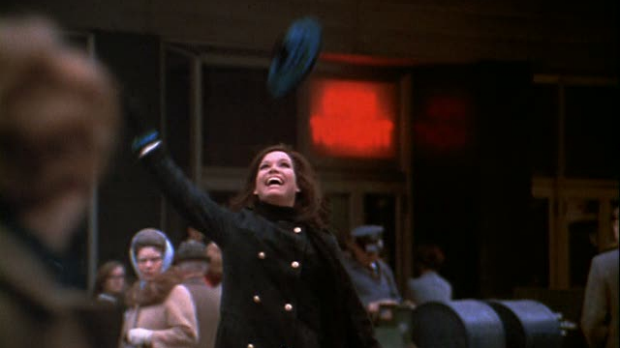 VALE TO A TV TITAN

Sad news with the passing of the great Mary Tyler Moore, age 80. After appearing as one of the great sitcom wives in The Dick Van Dyke Show in the 1960s she went on to produce and star in the game-changing 1970s sitcom The Mary Tyler Moore Show, which registered the rise of the Women’s Lib movement with Moore starring as an independent career woman. The show has become a cultural touchstone and her production company MTM went on to produce many successful shows including Hill Street Blues. On film, her finest role was opposite Donald Sutherland in Robert Redford’s Ordinary People, accounting for her only Oscar nomination. Moore stands alongside Lucille Ball and Carol Burnett as one of the great barrier-breaking women of TV and it is to such figures that the success of women on TV today owe a huge debt.

STAR WARS EIGHT GETS ITS TITLE

The Earth stopped spinning for a few moments this week as we all awaited the announcement that Star Wars: Episode 8 would be titled The Last Jedi. We can now start losing sleep in anticipation of the release of the first teaser trailer. The new film will feature Mark Hamill as Luke Skywalker and will co-star Carrie Fisher, who filmed all of her scenes before her untimely death. Watch for it in December, which Disney might as well declare Star Wars Month from now until the end of civilisation or until they stop making money, whichever comes first (probably the former).

Hollywood alpha-male James Cameron seems to be warming up for a return to the Terminator franchise once 2019 kicks in and he gets back the rights that he sold for $1 back in 1984 to Terminator producer (later wife; later ex-wife) Gale Anne Hurd. (The deal was on the proviso he couldn’t be fired as the director from the film). Deadline reports Tim Miller, director of Deadpool, is on board with Cameron to reboot the franchise and give it the ending it deserves.

Apart from receiving huge royalty cheques, Cameron had nothing to do with the franchise after T2 (1991), including the TV series The Sarah Connor Chronicles. He won’t direct any new Terminator property as he’ll be busy enough with his four Avatar sequels.

The Australian drama Lion is enjoying a dizzying time, both at home and in Hollywood.

On top of all this, Lion grabbed a swag of  Oscar nominations including: best film; director; supporting actor for Dev Patel (curious; isn’t that a leading role?); supporting actress (Nicole Kidman); adapted screenplay; score and cinematography (Aussie Greig Fraser getting yet more attention).

Without wishing to take anything away from Lion’s achievement in drawing so much Oscar love, it does nonetheless need to be noted that the film might be benefitting from a marked change in mood that has permeated the 2017 Oscar nominations list.

After last year’s very loud and strident #Oscarsowhite controversy – which noted how the previous two Oscar years had been dominated by white talent – this year’s list reflects the widespread demand for diversity.

Hence, the sudden spike of nominated films about and starring African-Americans.

Among them are: Moonlight (eight nominations); Fences (four); and Hidden Numbers (three). There are also nominated docos such as I Am Not Your Negro (about civil rights leaders); Ava DuVernay’s 13th (about US criminal justice and slavery); and O.J: Made in America, on the OJ Simpson trial.

So it’s easy to see how the story of Lion, which follows an Indian man’s search for his true home, fits in with the new mood of the room and would find favour with Oscar’s renewed taste for diversity.

It could all be a remarkable coincidence, of course. One certainly hopes (against hope) that it is and that ‘diversity’ hasn’t just become a weasel word meaning ‘positive discrimination’, which, this far into the 21st Century, is the last thing we need.