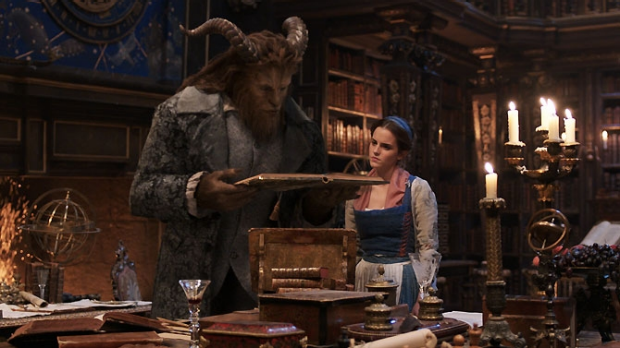 EMMA HITS BACK AT RETRO-FEMINISTS

What do you have to do to be a good feminist these days? Poor Emma Watson, having proved her feminist cred several times over through her work as the UN Women Goodwill Ambassador and with the UN’s HeForShe campaign, has been mauled by her own side because of a Vanity Fair photo shoot.

Here’s the skinny: to help spruik Beauty and the Beast, Watson appeared in a super-tasteful fashion spread for Vanity Fair magazine. But it seems some of the sisters didn’t like the fact that bits of her breasts were visible through all of that high-fashion clothing and so called her out for trashing the brand.

Ridiculous? You bet. In a video interview with the BBC, a visibly flabbergasted Watson pushed back at the accusation she had sold feminism out with this golden quote:

‘It just always reveals to me how many misconceptions and what a misunderstanding there is about what feminism is. Feminism is about giving women choice. Feminism is not a stick with which to beat other women with. It?s about freedom, it?s about liberation, it?s about equality. I really don?t know what my tits have to do with it. It?s very confusing.’

If you didn’t love her before, you probably will now.

Still on the film, Disney’s very expensive-looking live-action remake of their 1992 animated classic Beauty and the Beast has upset some of Russia’s more sensitive politicians in the ministry of culture over the fact that a supporting character is gay. Josh Gad plays LeFou, the sidekick of the film’s handsome-but-sexist beast Gaston (Luke Evans) who has hidden homo-erotic feelings for his master.

Director Bill Condon (Gods & Monsters) has been open about the character’s sexuality, and while Disney is cool with it – further enhancing the studio’s under-appreciated progressive mindset – the Russian heirarchy isn’t.

While calls for it to be banned were understandibly rejected – Russians adore American culture and, to the eternal annoyance of their leaders, don’t like being denied access – the film has been slapped with a 16+ rating. This means Russian kids won’t be able to see it in cinemas and will have to contend with watching it on bootleg, which won’t be hard as piracy  is still rife in Russia.

But never mind kids. Given how the original became a huge hit as a date movie, surely the Russian leadership should be more worried about the film’s evil influence on the adults watching it. How many marriages will the film destroy? How many families will be torn apart? Come on, Russia. Lift your game.

The harsh reality of just how harsh Hollywood can be hit Aussie comedian Tim Minchin this week like a tonne of bricks. Having slaved away for four years on his cherished animated movie project Larrikins, the talented composer/lyricist for the smash hit Matilda – winner of four Tony Awards in 2013 – found out that the whole affair was now history.

The project, which already had Hugh Jackman, Margot Robbie, Rose Byrne, Ben Mendelsohn and Naomi Watts lined up for voicework, has been offically shut down over creative differences by Dreamworks.

Crestfallen, but not vanquished, he responded by putting on a show in a New York bar called Tim Minchin ? Getting Drunk and Playing Ballads.

‘I’ve recently been working in 3 different continents, missing my kids a lot, sleeping too little and not playing piano enough. And then a couple of days ago, the animated film to which I’ve dedicated the last 4 years of my life was shut down by the new studio execs.

‘The only way I know how to deal with my impotent fury and sadness is to subject members of the public to the spectacle of me getting drunk and playing ballads.

‘I suspect I won?t be very funny, I won?t be doing any stand-up, and I might act a bit bitter and spoilt. On the upside, the tickets are as cheap as I could make them, and I might be tempted to buy a round.

‘Come and drink with me, my friends, and we?ll see what happens.

The hope, of course, is that a film with so much work already invested in it will find a home at another studio. And people love it when studios play white knights. Meantime, Minchin might find small solace in the fact that not even great directors are immune from such gut punches.

LOGAN BELTS UP FOR FERRARI BIOPIC

With the Wolverine trilogy now done and dusted, Hugh Jackman, 48, is now circling the role of Enzo Ferrari in Michael Mann’s long-delayed big-screen biopic. Now free of the obligation to maintain that ripped torso, Jackman is apparently happy to put on the weight required for the role, something that frightened off Christian Bale, the previous applicant for the part who has experienced the health risks of rapid weight loss and gain for film roles. Set in 1957, the film will chronicle Ferrari’s famous rivalry with Maserati and is set to star Noomi Rapace (Girl with the Dragon Tattoo) as Ferrari’s fiery wife, Linda.

In more exciting casting news, Tom Hanks, one of the best actors of his generation, and Meryl Streep, one of the most overrated of hers (it’s not just US President Trump who thinks so) are set to team up for Steven Spielberg’s period political scandal drama about the Pentagon Papers. To be called The Post, the film will recall the upheaval caused in 1971 when a swag of super-secret Pentagon documents – all 47 volumes worth – about the dire state of the Vietnam War were leaked to the Washington Post and the New York Times. Hanks will play Post editor Ben Bradlee and Streep will be publisher Kay Graham, the pair who went to war with the US government over the right to publish. No word yet on who will play Daniel Ellsberg, the leaking military analyst at the centre of the affair.

In what could be a major foot-in-mouth moment, no-nonsense actor Samuel L Jackson has voiced his displeasure over all the British black actors appearing as African Americans in films such as Get Out and Selma. While selling his latest film, Kong: Skull Island, on New York radio station Hot 97, Jackson said:

‘There are a lot of black British actors in these movies [and] I tend to wonder what [Get Out] would have been with an American brother who really feels that. Daniel [Kaluuya] grew up in a country where they’ve been interracial dating for a hundred years. What would a brother from America have made of that role?’

And while British actor David Oyelowo put in an outstanding performance as Martin Luther King Jr in Selma, Jackson mused: ‘There are some brothers in America who could have been in that movie who would have had a different idea about how King thinks.

Unsurprisingly, Jackson’s quips during the leisurely 35-minute interview have rubbed against the unifying spirit of the diversity cause, best summed up by British actor David Boyega (Star Wars: The Force Awakens) who tweeted angrily:

‘Black brits vs African American. A stupid ass conflict we don’t have time for.’

While Jackson’s comments have sparked some debate and support, it’s hard to see them having any long-term traction.

The quickest and easiest way to highlight their silliness is to look at the Oscar-winning 2013 film 12 Years a Slave: about the American slave experience, it starred Brit Chiwetel Ejiofor in the lead, and was directed by black Brit Steve McQueen. The film won three Oscars: Best Film; Best Adapted Screenplay; and Best Supporting Actress for Lupita Nyong’o. And just to punch the point, this year’s Best Film winner, Moonlight, featured an Oscar-nominated performance from Naomie Harris, also a Brit.

Given how much good Jackson has done for the profile of African-American actors over his remarkable career, he must be kicking himself for seeming to push against the talent-based principle applied when casting black actors. Just to clarify, when directors are casting films they are open to auditions from actors of any nationality and assign roles on the basis of merit rather than postcode.

Unsurprisingly, Hugh Jackman’s high-quality swansong to the X-Men/Wolverine sub-franchise Logan took top spot, opening with $7.8million over 414 screens, its per-screen average of $18,966 indicating people were packed into those weekend sessions. The Australian drama Jasper Jones (#4) took $632,538, though its preview take bumps its opening tally to a fabulous $815,428. For a measure of the influence of Oscar, best picture winner Moonlight saw an average audience jump of 222%, taking $324,214 across the weekend for a fourth-week total of $1.43m.