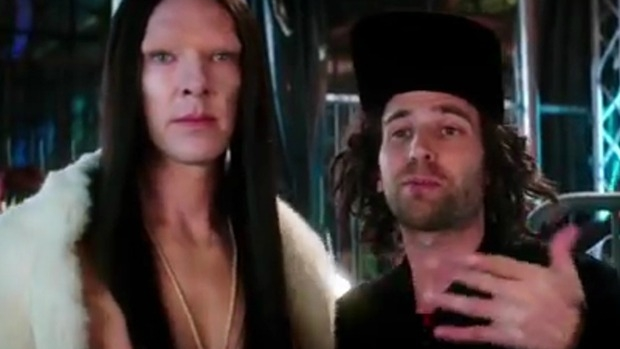 Straight from the Thanks For The Free Publicity desk comes news that upward of 13,000 people have ‘signed’ an online petition calling for the boycott of the upcoming Ben Stiller comedy Zoolander 2, based purely on its trailer. What’s caused the upset is the fleeting 10-second appearance of Benedict Cumberbatch as an androgynous model whose name is ‘All’. It felt cartoonish and therefore insulting for all sorts of silly reasons so, rather than reserve judgment until they at least saw the film, the lobby is lobbying for a boycott based on the trailer. Really, people, a thick skin and a sense of humour are so important to have in life, especially if you’re in a minority. And surely Cumberbatch’s outstanding performance and subsequent pro-gay press utterances for The Imitation Game makes him among the most compassionate actors around when it comes to the rights of the marginalised. So lighten up.

With the success of Wild and Gone Girl – and, yes, Hot Pursuit – under her belt, occasional actress and newly minted producer Reese Witherspoon has picked up the rights to Robin Gerber’s Barbie and Ruth, which tells the story behind  Barbie creator Ruth Handler. The film is apparently intended as a tribute to her creativity and fortitude in the male-dominated toy industry of the 1950s. No word yet on whether the film will have any associated merchandise.

Some might vaguely remember Rose McGowan from the TV series Charmed and such films as Monkeybone, Scream and Jawbreaker. (Uhm, maybe not that last one so much.) Well, the purse-lipped bad girl has reinvented herself as a director – her excellent short film Dawn got raves at Sundance; check it out on YouTube – and a highly opinionated one at that. Driven out of acting by boredom, McGowan – to her enormous credit – has come out swinging against the mololithic blandness of the comic book movie genre. In a highly articulate call-to-creative-arms outburst on Instagram, she declared:

‘I’d like to petition for other stories to be added to the slate. Where are the human stories? I don’t want green goblins and tight outfits. I want intelligence, daring, work that drives society forward. I want a mirror, not every cliche regurgitated ad nauseum.’

McGowan caused a stir recently when she said her agent had fired her for speaking out against sexism while being cast for an Adam Sandler film. Here’s hoping she does the right thing and channels all that artistic passion onto film and doesn’t waste it on Instagram posts.

Remember that cute pinafore dress Dorothy (Judy Garland) wore in The Wizard of Oz? It just sold for a cool $1.56m in New York – and that includes 76-year old sweat stains around the neck. Question is: will the anonymous buyer put it in for dry cleaning?

It really makes you wonder what you have to do to get a movie made about you. Astronaut Neil Armstrong made history when he was the first human to step on the Moon in July 1969, yet while there have been countless documentaries about the event, Armstrong himself has never been the subject of a film. Even his troubled co-pilot Buzz Aldrin was heralded in a pretty good 1976 telemovie Return to Earth starring Cliff Robertson. Well, that’s hopefully about to change as Ryan Gosling circles the role of  Armstrong for a film to be directed by Damien Chazelle (Whiplash). Based on James Hansen’s official, Armstrong-endorsed 2005 bio First Man: The Life of Neil A Armstrong its prospects are strong given the success of space sagas such as The Martian, Gravity and Interstellar.

Hollywoodised actor/director Kennneth Branagh – once into Shakespeare; now does Thor movies and Disney remakes – is all set to portray master detective Hercule Poirot in the newest film version of Agatha Christie’s Murder on the Orient Express. Branagh, who will also direct, promises something different fron the dubiously acclaimed 1974 film directed by Sidney Lumet. Here’s hoping he at least changes the ending, which everybody knows, more or less. After all, what is the point of remaking a mystery unless you, well, have some mystery in it?