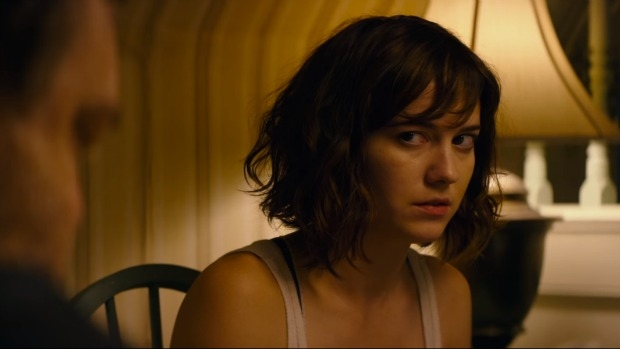 Stuck in a well-appointed doomsday bunker, distraught city girl Michelle (Mary Elizabeth Winstead) can’t figure out whether what her new landlord Howard (the ever-good John Goodman) is telling her about the outside world is true or the fantasy of some deranged conspiracy theorist. Has America been hit by a nuclear strike? Is it biological warfare? Invading aliens?

It’s a tense time in a confined space and director Dan Trachtenberg, taking his cue from Alfred Hitchcock (who would have loved the premise of this film), keeps tightening the screws until the final big reveal.

To their credit, American directors honour their obligations to deliver promised payoffs to an audience, though here things do conclude a little quickly and neatly. How much more fun the film could have been had the suspense been extended for another 10 minutes.

The once-funny Sacha Baron Cohen, who brought us Ali G, Borat and Bruno, now brings us pretty conclusive evidence that his interest in character comedy has bottomed out.

His new creation Nobby is a lower-working class lout who loves drinking and soccer and the sense of community that binds his poverty-stricken district of Grimsby together.

He’s been reserving a room in his house for 28 years for the return of his brother Sebastian (Mark Strong), a secret agent. So when he turns up needing a place to hide you think, well, here’s a perfectly good premise for a character-based comedy.

But no. Instead of introducing Sebastian to the badlands of suburbia, Cohen takes Nobby into secret agent land and the film ferments into a loud, vulgar action comedy entirely pegged on several extreme gross-out sequences.

You might see footage of squirming audiences reacting to these moments in ads or on YouTube. Rest assured: they’re not responsing to any sort of comic invention or ingenuity. All you’re seeing is the reflex of revulsion, the easiest reaction for a bottom-feeding comedian to rouse.

If artless gross-out is your thing you’ll love being in on the water-cooler talking points of Grimsby. But make no mistake: the film is an excrescence, the type of desperate act you get when a comedian has dried. It makes his previous film, The Dictator, look like The Magnificent Ambersons.

Characters embark on a night on the town in the German drama Victoria, which was filmed entirely in one take.

From Germany comes this mesmerising knockout about a Spanish girl, Victoria (Laia Costa), who hooks up with a gang of likeable louts in a nightclub and spends the rest of the night with them. This includes smoking, drinking, laughing, a bit of loving and some high-risk petty crime.

What makes Victoria truly remarkable is that it was shot entirely in one take, a technique that draws you right into the slowly evolving drama. Director Sebastian Schipper achieved the desired effect after only three attempts.

This love of long, complicated takes we’ve been seeing in films such as Children of Men, Gravity, Birdman and The Revenant suggests a reaction against the frenetic rapid-fire cutting so common in blockbuster films. Here’s to its continued evolution.