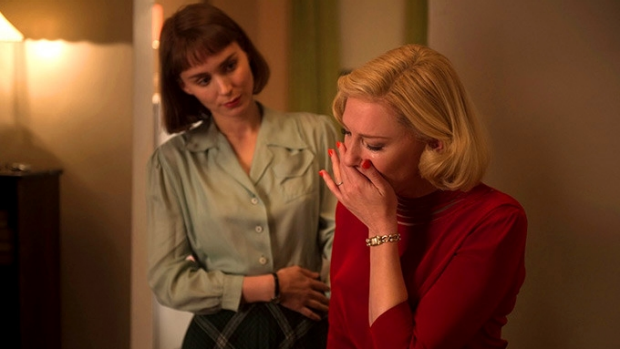 In wintery, painterly 1950s New York, the well-to-do middle-aged, middle-class Carol (Cate Blanchett) and lowly department store employee Therese (Rooney Mara) tentatively embark on a friendship that leads to a road trip and, possibly, a relationship, despite the disapproving mores of the time.

As a mother trying to secure custody of her child from a bitter husband (Kyle Chandler) Carol’s aware of the taint a charge of homosexual conduct would bring, though unaware of the measures her ex will go to expose it.

Based on the Partricia Highsmith novel The Price of Salt, director Todd Haynes steers away from the melodrama that drove his similarly themed 2002 Douglas Sirk-esque film Far From Heaven, the emphasis here being on restraint, mood and beautifully nuanced performances, all framed by the type of exacting, casual period recreation that has now become standard.

The Oscar buzz around Blanchett’s performance is warranted, though it’s her work in the largely ignored Truth that should have received more attention.

Babe in the woods: Chloe Grace Moretz in the teen sci-fi flick The 5th Wave.

What begins with the giddy prospect of a fun apocalyptic alien invasion movie steadily morphs into yet another futuristic heavy-browed teens-vs-the-grown-ups movie.

As its young, reluctant action star Chloe Grace Moretz (Carrie; Kick Ass) gives it her all. She sells desperation really well, especially as she stumbles through the wreckage of a modern civilisation sucker punched by aliens. Her crusade is to try and reunite with her brother who is now part of a training program run by the US military (lead by Leiv Schreiber) to take the fight to the aliens, who have the ability to take on human form.

It’s passable entertainment, directed by J Blakeson (The Disappearance of Alice Creed), but one ponders just how many of these teen-driven sci-fi sagas we are supposed to keep track of once we realise that this film is just part one of an ongoing tale.

Wall St Waffle: the fiery cast get down to business in The Big Short.

The reasons and people behind the world-shattering financial collapse of 2008 are given a vibrant, high-key going over in this boisterous, often funny, often frightening business film by writer/director Adam McKay, who steps up from his usual comedy mode (Step Brothers; Talladega Nights; Anchorman, etc) to deliver a pacy swirl of ego and greed and conflicted consciences.

A clutch of terrifically energetic lead performances from Steve Carell, Brad Pitt, Christian Bale and Ryan Gosling manage to overwhelm the film’s truckload of business jargon, which sometimes gets too thick to follow, even when explained with the aid of Selena Gomez and Margot Robbie.

It’s a dizzying semi-comic, totally serious ride through the canyons of finance, and while you might not comprehend every single turn of phrase uttered by the film’s wide array of hyper-active characters, McKay is careful to keep the emphasis on the character drama, and the underlying theme of how flexible morality becomes once the prospect of easy money enters the frame.

Fun in the snow: Kurt Russell and Samuel L Jackson face off in Quentin Tarantino’s The Hateful Eight.

A stagecoach trying to outrun a blizzard across the wilds of post-Civil War America takes refuge at a lonely, frost blasted outpost. Inside, bounty hunter (Kurt Russell) is eager to see his quarry (Jennifer Jason Leigh) hanged, but fellow bounty hunter (Samuel L Jackson) begins to suspect the motives of some of those gathered as a jagged plot slowly unfolds.

Fans of writer/director Quentin Tarantino will take the usual delight in his playful dialogue, but will wonder why on earth he went to all the fuss, bother and expense of shooting his yapfest in the old 70mm format.

Designed to showcase epic spectacles, there’s simply not sufficient opportunity to show off what 70mm can do, given that most of the film takes place inside stagecoaches and the cabin.

Indeed, The Hateful Eight comes off as an elaborately photographed stage play the plot of which, incidentally, is way too long and has its share of holes. Think Mrs Marple Goes West.  And, for the record, it should be said how Tarantino has gone on the record about how he’d like to adapt The Hateful Eight into a play that rearranges the film’s events into chronological order.

So, is it worth seeing The Hateful Eight at one of the special 70mm screenings – complete with overture and intermission – before it opens in normal release next week? Well, not really. The snowy exteriors look lovely, but even cineastes and hardened hardcore Tarantino fans will be hard pressed to justify the use of 70mm or the three-hour duration.

For all his good intentions and adoration of old-school filmmakers, Tarantino has overreached here –  a hard thing for a guy with so much talent to do.

That said, one thing Tarantino can never be faulted on is the commitment he gets from his players. The performances here are sterling, especially from Jackson, Russell and the Leigh. The authenticity of their Wild West swagger often make it feel like the actors were cloned directly into their costumes.