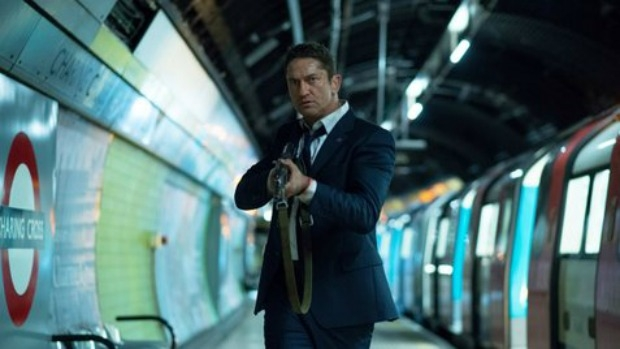 They’re at it again, only bigger, better and definitely louder than the first time around when terrorists merely tried taking over the White House in 2013’s Olympus Has Fallen. Here, they’re going for all of London and, again, Gerard Butler’s gruff Secret Service agent is shooting and stabbing every one he can to defend President Aaron Eckhart. The clever set-up involves the bad guys hitting as many free-world leaders as possible during a state funeral.

Director Babak Najafi mounts his chases, fireballs and gunfights with a real sense of scale, his most impressive shots showing much-loved London landmarks as they crumble and bite the dust.

A surprising amount of the film’s action is refreshingly ambitious, with the sequence in which a prolonged gun fight is covered in a single tracking shot that echoes the best of the Hong Kong school and pushing the film way above average.

Though Butler is barely comprehensible throughout – whatever the accent he’s attempting, the guy always sounds like he has a mouth full of marbles – he makes it clear through his tough talk that this is an unapologetic, proudly political post-9/11 Red State actioner where no quarter is given to the terrorists. Their slaughter is our catharsis, and there’s lots of it.

Did we miss anyone?: The entire cast of Disney’s dazzling, gloriously entertaining Zootopia.

In the alternate world of this glorious, marvellously conceived explosion of Disney family entertainment the animals of the wild live in high-tech harmony in Zootopia, a mega-city designed to accomodate their different shapes, sizes, habits and temperaments.

Into the towering metropolis hops feisty Judy Hopps (voiced by Ginnifer Goodwin), a spunky bunny from the country who’s starting her job with the police, first as a lowly traffic cop, then as a naive detective investigating the disappearance of certain creatures.

The dazzling design of Zootopia offers a non-stop stream of invention and visual wit that perfectly enhances a surprisingly involving plot.

Animation-wise, the film sets a new benchmark in humanising animals with its sure-to-be-classic scene when our heroine is confronted with a government department staffed by sloths. Fans of old-school Disney animation will appreciate how the studio’s rich tradition of matching human and animal attributes – as in The Jungle Book and the under-appreciated Robin Hood – is duly honoured.

A gleaming gem of a film.

Solid, sombre, haunting Australian adaptation of Henrik Ibsen’s The Wild Duck, set in a contemporary mill town that is dying.

Despite trouble at the mill he lives a contented, spirited life with his dad Walter (Sam Neill), wife Charlotte (Miranda Otto) and daughter, Hedvig (Odessa Young) – until a long-buried secret boils to the surface.

Directed by first-timer Simon Stone (best known as a theatre director) the film is an engrossing slow burn drama as pieces in a long-dormant puzzle are slowly shifted into place by fate and bad judgement.

Though the finale arguably cheats audiences out of a promised pay-off – Australian films continue to wrestle with their final acts – the story is thought-provoking and the performances top-notch, with Odessa Young proving herself a talent of considerable power and pathos.

Do not pet: A troublesome goat harasses two farm children in the superb horror film The Witch.

Here’s a powerful example of minimalist horror film-making at its best, where less is definitely more and mood proves itself infinitely more unsettling and unnerving than visual effects.

Set in the Gothic desolation of a remote 17th century New England farm, a banished family lead by a God-fearing father (Ralph Ineson, best-known as Cleftjaw in Game of Thrones and Chris Finch from The Office) slowly begins to fear that his family, and possibly even his family’s goat, is being taken over by the evil spirit of the witch who lives in the forboding forest that thrives nearby.

First-time writer/director Robert Eggers deserves major kudos for making the type of subdued horror film that refuses to remain in the cinema as you leave.