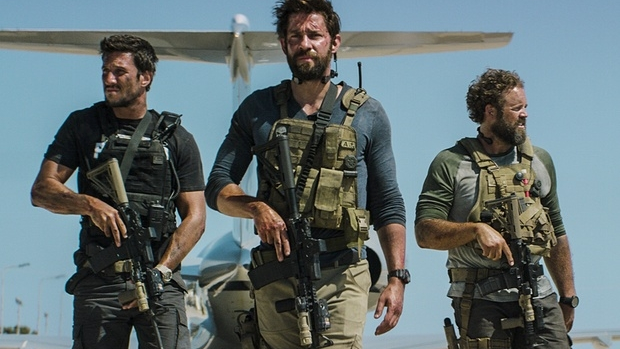 Taking a break from his Transformer showreels, director Michael Bay mounts a frenetic, exciting, realistic recreation of the 2012 battle in Benghazi where a security team made up of ex-soldiers defended a besieged American diplomatic outpost.

As with The Hurt Locker (2008), Lone Survivor (2014) and Clint Eastwood’s American Sniper (2015), the film is an unashamed celebration of American courage when nose-to-nose with the enemy.

The action scenes are visceral and vivid, the pace relentless as Bay puts us right in the middle of battle, showing us exactly where bullets fly and bombs fall, often showing the trajectory of glowing machine gun rounds as they streak through the darkness and find their targets during night combat.

Like American Sniper, 13 Hours is an unapologetically patriotic work that rails against politically correct diffidence to declare that, for all of America’s faults – and the film points those out clearly – its soldiers are fighting the good fight.

As well as making a very good war film, Bay deserves special kudos for 13 Hours. At this point in cinema history he holds the dubious distinction of being one of the most commercially successful and critically reviled American directors ever. He could so easily have just stamped out another Transformers money machine, but instead he opted for a movie tribute to fighting men, a statement that shows its own special kind of bravery.

Easily one of the most intimate and harrowing Holocaust films yet made, Son of Saul essentially presents one man’s living nightmare on film. Inside the Auschwitz concentration camp, blank-faced inmate Saul (Geza Rohrig) works with the Sonderkommando, the special unit of Jewish prisoners the Nazis used to help lull the arriving trainloads of Jews into a false sense of security before tricking them into the gas chambers.

First-time director Laszlo Nemes, who co-wrote the Oscar-nominated film with Clara Royer, employs an inventive technique to heighten the horrors of the camp. By pushing the camera close into Saul’s expressionless face he relegates everything else into the background where it is kept mostly out-of-focus and on the outer rim of the frame.

It’s a brilliant example of less is more, of emphasis through de-emphasis. Having led hundreds of Jews into a gas chamber, the camera steadies on Saul’s unfeeling face as the air fills with screams.

Storywise, the film sticks to a simple, emotionally raw premise: amidst all the horror and carnage and his own learned indifference, Saul wants to accomplish one tiny act of humanity. Yet even that presents its own set of nightmares.

Anyone with even a passing interest in Holocaust cinema needs to see this extraordinary film. It also serves as a reminder of the superb 2001 film The Grey Zone by Tim Blake Nelson, which also dealt with the Sonderkommando and their horrific duties in the service of their Nazi masters.

How’s my breath?: One of the few worthwhile moments in the otherwise awful FX-driven epic Gods of Egypt.

Hold your nose, folks. Your big-screen stinkers rarely come any bigger or smellier than this colossal, mega-budget turkey.

Set in a fantasy version of Ancient Egypt where gods live among mortals, Gods of Egypt is an epic, endless, boring mess of a film that embodies all that is wrong with post-content 21st century cinema.

The story is a largely incomprehensible scramble of colliding plots and sub-plots; the performances are bland and atonal; the production is horrendously over-cooked – helped not at all by the pointless deployment of 3D; and the entire enterprise is swathed in an artless, diarrhetic stream of visual effects that fills the screen with a ceaseless blizzard of dust and rubble and collapsing structures.

And though it’s an American studio film this godawful clunker has got Australian fingerprints all over it, from director Alex Proyas (I, Robot; The Crow) to the cast – Bryan Brown; Robyn Nevin; Bruce Spence; Brenton Thwaites; Rachel Blake; even Geoffrey Rush – to the sprawling physical production and extensive visual effects.

The $140 million film was made mostly in Australia to take advantage of the government’s generous tax credit scheme, giving lots of local film people lots of work. This is good, and, to be absolutely fair, the design, sets and look of the film is impressive.

The reels and reels of expensive locally produced visual effects are certainly state of the craft, though that should not to be confused with state of the art. The latter demands ingenuity, originality and imagination, The former mere technical proficiency. .

Despite all the destruction and movement – a chase involving two Amazons riding giant fire-breathing serpents is the film’s lonely highlight – the plodding, spiritless direction by Proyas makes the film a real dirge to sit through.

Gods of Egypt does, however, offer the rare novelty of seeing an Oscar-spangled actor the calibre of Geoffrey Rush in a big, bad film. He plays an ageing God who flies around in Earth orbit in a hand pedal-powered space ship.

This makes no sense at all, but on preview night it was the one scene that drew the biggest laugh.

The Coen Brothers’ valentine to 1950s Hollywood is a misfire, but an enjoyable one. The film essentially offers a colourful, comic walk-through of a busy studio as a frazzled studio head (Josh Brolin) deals with the abduction of his main star (George Clooney) in the middle of a shoot. The elaborate, beautifully slick musical numbers starring Scarlett Johansson and Channing Tatum run for minutes on end and suggest the Coen’s might have been better off making a full-on, old-style, unironic Hollywood movie rather than an ensemble comedy that merely pays tribute to them.

Here’s a perfect example of a film that sounds a lot more fun than it is.

Based on the hit trash, genre-mashing novel by Robert Ayscough, the film should have been much faster, a lot funnier and much, much sillier as Elizabeth Bennet (Lily James) and Mr Darcy (Sam Riley) try working out their inner-most feelings for each other in a sculpted Jane Austen landscape peppered with hedgerows, green fields and brain-eating zombies.

The film has the look of a lush historical drama and the women are sexy as heck in their period outfits and under-garments to which are strapped knives and hatchets designed to deal with The Undead when they show up uninvited to a society soiree, but the parodic fun has somehow been lost in translation.

Writer/director Burr Steers doesn’t quite have the action chops or straight-faced comic swagger Russian director Timur Bekmambetovr displayed in the fabulous Abraham Lincoln: Vampire Hunter (2012), which was a much more accomplished rendering of the same idea.